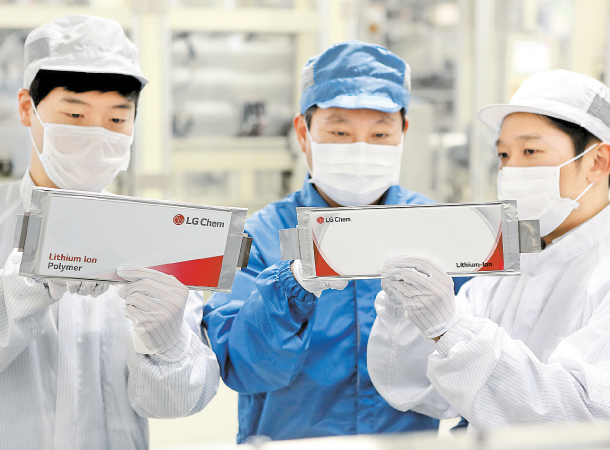 LG Chem was chosen at No. 10 on a 2018 list of global chemical companies evaluated by C&EN, a weekly news magazine published by the American Chemical Society, the company said Tuesday.

For the first time in the firm’s history, LG Chem’s sales have already topped 30 trillion won ($25 billion) this year. The company is aiming to double its sales to 59 trillion won by 2024 and boost its profit to make it into the top five in the C&EN ranking.

In the petrochemical division, LG Chem is expanding its high value product ratio and developing future technologies to keep its business competitiveness in the global market.

The company has also invested $100 million into its Huanan factory in China to expand its production capacity for an additional 150,000 tons of ABS.

Through this move, LG Chem is trying to cement its position at the top of the global ABS market with a total production capacity of 2 million tons of ABS - 900,000 tons in Yeosu, South Jeolla; 800,000 tons in Ningbo, China; and 300,000 tons in Huanan, China.

In 2018 July, LG Chem invested a total of 2.8 trillion won in its Yeosu Naphtha Cracking Center (NCC) in South Jeolla to produce an additional 800,000 tons of PO. The company is also preparing production facilities in Dangjin, South Chungcheong.

With the new facilities, sales of high-value products are expected to continue to increase over time.

In the battery division, LG Chem is working on research and development (R&D) to keep its competitiveness in the market and ensure its market share in terms of price, performance and safety.

Especially in terms of the car battery business, LG Chem is targeting third-generation electric cars to win supply bids and take the No. 1 spot in the global market.

LG Chem is working to increase its battery production with an aim of realizing a production capacity of 100 gigawatt hours by 2020.

Along with this, LG Chem is willing to actively invest in improving its production and quality of revolutionary battery development.

As for its advanced materials division, LG Chem is leading the way with its lightweight plastic business while increasing the market competitiveness for organic light-emitting diode (OLED) materials to monopolize the display market, which is rapidly changing in the fourth industrial revolution.

LG Chem is aiming to secure cathode-producing technology, one of the four main materials used for producing batteries.

In April 2019, LG Chem agreed to a joint venture with Huayou Cobalt to secure a stable supply of cobalt, a core material for batteries.

The company’s life sciences division is researching diabetes and related diseases, immune systems and cancer and is developing new medicines in these areas.

In the diabetes and related diseases sector, LG Chem is using its experience developing diabetes pill Zemiglo to accelerate the speed of developing new medicines.

When it comes to autoimmune diseases and cancer, LG Chem is trying to encourage open innovation with domestic and international companies to expand the range of medicines available.

LG Chem is actively carrying out R&D investment to continue its sustainable growth, which can be seen by the fact that it is planning to spend 1.3 trillion won on R&D and increase the number of employees in the research division to around 6,200.

LG Chem’s efforts are clearly paying off. According to the Brand Finance Chemicals 10 2019 report from Brand Finance, LG Chem has also jumped up the ladder to pass DuPont and has taken fourth place in terms of brand value.