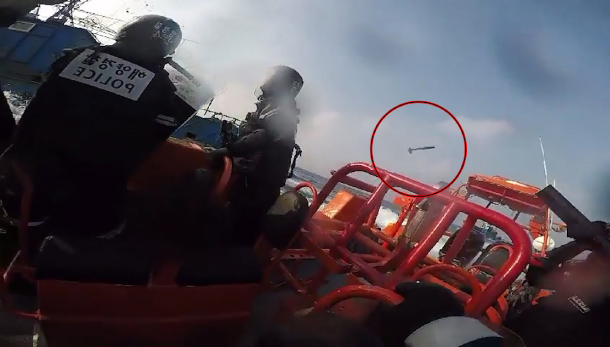 An axe is seen being thrown at Korea Coast Guard officers as they approach a Chinese boat fishing illegally in Korean waters in the West Sea on Saturday. The Coast Guard apprehended the boat and its crew members. [KOREA COAST GUARD]

Fishermen aboard a Chinese fishing vessel threw axes at Korean maritime authorities when approached while illegally fishing in the Yellow Sea on Saturday, said the Taean Coast Guard Station Sunday.

The Taean Coast Guard was patrolling a part of Korea’s exclusive economic zone in the Yellow Sea around 3:45 p.m. Saturday when it discovered 14 Chinese boats fishing without permits from the Korean government.

When the Coast Guard approached, fishermen aboard one of the vessels, the Liaozhangyu 55200, threw at least two hand axes and a shackle at the Coast Guard.

The Coast Guard provided the press with video footage in which at least two axes are seen flying through the air at the Coast Guard officers as they approach the Chinese boat.

The Coast Guard also provided a photo of the two hand axes and the shackle they said were thrown at them. The boat was found to have illegally caught around 200 kilograms (441 pounds) of cod, squid and cero mackerel.

Another Chinese fishing boat that also illegally caught around 200 kilograms of cod, squid and cero mackerel was apprehended by the Korea Coast Guard.

“The Korea Coast Guard will transfer the two illegal Chinese fishing boats and take legal action, while exhorting its Chinese counterparts to prevent any recurrences,” the Taean Coast Guard Station said in a statement Sunday.

Illegal fishing by Chinese boats off the west coast has been a recurrent problem for Korea, especially during fishing seasons from March to May and October through January.

“Since international agreements and regulations on illegal, unreported and unregulated fishing are gradually being strengthened, we will thoroughly protect international fishing zones,” said Song Byung-yoon, captain of a team at the Taean Coast Guard Station. “We will continue to crack down on abnormal and illegal violations of our maritime sovereignty.”

The number of foreign boats apprehended for illegal fishing in Korean maritime territories has dropped in recent years, from 378 in 2015 to 136 in 2018.