Third GGGW kicks off in Seoul

Third GGGW kicks off in Seoul 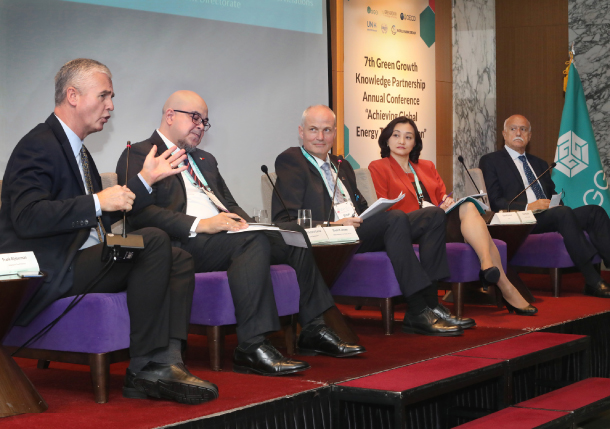 Frank Rijsberman, far left, director-general of the Seoul-headquartered Global Green Growth Institute (GGGI), moderates a discussion on sustainable economic growth and energy security through green energy with other delegates on Monday at the InterContinental Seoul COEX hotel in Gangnam District, southern Seoul, during the 7th Green Growth Knowledge Partnership Annual Conference. The conference was held on the first day of the Global Green Growth Week, a weeklong event hosted and organized by the GGGI. [PARK SANG-MOON]

Ban Ki-moon, chair and president of the Seoul-based Global Green Growth Institute (GGGI) and former secretary general of the United Nations, called on the international community Monday to adopt “resolute measures” to transform the world’s fossil fuel-based energy systems, stressing that the key to that transformation is collective action at “all levels” from “all countries.”

“In order to achieve the emissions reduction ambitions of the Paris climate agreement or the Sustainable Development Goals,” Ban said in a pre-recorded video message that was played during the opening ceremony of a global green growth conference in Seoul, “we - the international community - will need to adopt resolute measures to transform our fossil fuel-based energy systems.”

“For developing countries, in particular, the green energy transformation can play the role of a bridge to modernization, economic growth and greater social inclusiveness.”

A career diplomat who now also serves as head of Korea’s National Council on Climate and Air Quality, a newly established presidential committee working on fine dust reduction, Ban urged governments across the globe to adopt “bolder national strategies and more ambitious targets” for renewable energy and take advantage of the “rapidly falling cost” of solar, wind and other renewable energy sources and energy storage.

Ban continued that governments need to abandon fossil fuel subsidies and provide incentives for businesses to invest in clean energy infrastructure and technologies and for consumers to engage with clean energy providers.

Ban’s remarks resonated at the InterContinental Seoul COEX hotel in Gangnam District, southern Seoul, which was filled with policymakers, researchers, environment experts and representatives of the private sector from all over the world, who are in Seoul this week for the GGGI’s flagship conference, the Global Green Growth Week (GGGW).

The 7th Green Growth Knowledge Partnership Annual Conference, which featured Ban’s opening speech, is among several events during the GGGW, which kicked off Monday and lasts through Friday.

This year’s GGGW, hosted and organized by the GGGI, is the third of its kind and runs under the banner “Unlocking Renewable Energy Potential.” The GGGI said more than 900 people from over 40 countries were expected to join the weeklong event.

The GGGI is an international inter-governmental organization headquartered in Jung District, central Seoul, which aims to support and promote green growth by partnering with numerous countries to help them build economies that are efficient and sustainable in the use of natural resources.

“The position that renewable energy is more expensive than fossil fuels is no longer credible, with many of our member countries discovering that renewables are not only the more environmentally conscious alternative but the cheaper option as well,” Frank Rijsberman, director-general of the GGGI, said in a statement.

This afternoon, the GGGI will lead a discussion on the inclusive renewable energy transition and the generation of jobs in low- to middle-income countries.

From Wednesday morning to afternoon, a discussion on practical and ambitious ideas to improve global climate governance will be held, in which Ban is expected to make a personal appearance to relay a keynote address on innovating the Paris Agreement and talk about the future of climate governance.

On Wednesday afternoon, the GGGI will hold an event to launch its new Green Growth Index, which the institute said was the “first comprehensive index” designed specifically to track and assess green growth performances of 115 countries in different areas of green growth.

On Thursday morning to afternoon, the GGGI’s 8th session of the assembly and 12th session of the council will be held, in which member countries of the GGGI will look over the institute’s management and operations.