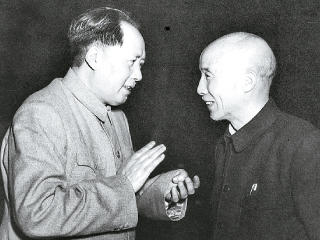 Chinese writer Lao She praised “Beijing’s autumn is heaven” in “Dream of Living.” The Beijing Legation Quarter, where a number of foreign embassies had been located during the late Qing Dynasty, is the highlight of Beijing’s autumn. On Oct. 14, I visited the Counselors’ Office of the State Council in the old Dutch legation. It was open to diplomats and foreign press for the first time in 70 years.

In November 1949, Mao Zedong invited Fu Dingyi, who had taught him at Hunan University, to Zhongnanhai. He was asked to take a job at the Central Research Institute of Culture and History and the Counselors’ Office. Fu turned it down, saying the job would be more appropriate for someone who had knowledge and experience but was poor. But Mao convinced him that the job requires not just knowledge, experience and poverty but also talent, personal network and prestige, so Fu should build a team of old and prestigious scholars who were unemployed and struggling.

It was the beginning of China’s most celebrated think tank — the Counselors’ Office. It has become an organization that assists scientific and democratic policy making by studying and researching key government tasks, directly reporting to the Premier, proposing legislation and revisions of laws and conveying public opinions.

The Premier appoints renowned scholars or retired government officials as counselors. In the past 70 years, there have been only 191 of them, currently 41 members. They are more influential than the members of the National People’s Congress or Chinese People’s Political Consultative Conference. Wang Zhongwei, director of the Counselors’ Office, said that even the standards for a minister are not so high. And 70 percent of the counselors are non-Communist Party members for the united front. Non-Communist Party members retire at age 70, while party members retire at age 65. It is an advisory agency mostly centered on opposition.

How about independence? Xu Xianping, a counselor and former deputy director of the National Development and Reform Commission, said that the office’s 2016 new economy report stated, “Real estate is crazy, [there is] no hope for manufacturing, old companies are struggling and new economy is glorious.” He stressed that the Counselors’ Office speaks up. He also mentioned a case in which wrong regulations were removed thanks to its report on the government-pushed Yangtze economic belt.

In China, there is no competition for power by political parties and no monitoring by the media. Instead, political negotiation groups, including the Counselors’ Office, enhance the effectiveness of policies. Korea often struggles with unripe policies of the ruling party. Rather than having elections bring judgment on policies, how about enhancing completeness through systems?