Not-so-Mini Clubman gets a face-lift for 2020

Not-so-Mini Clubman gets a face-lift for 2020 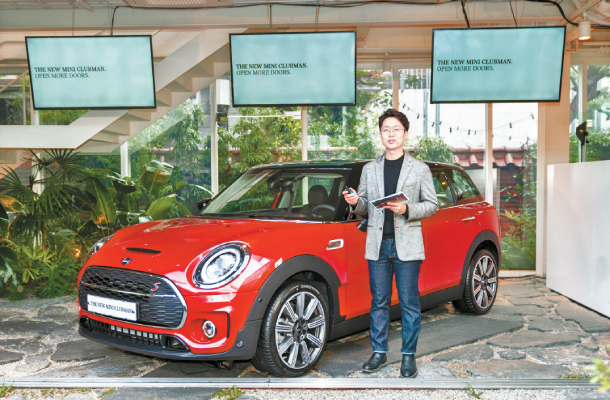 BMW Group Korea has introduced a face-lifted model of the Mini Clubman hatchback as it continues its race to sell 10,000 Mini vehicles this year.

Mini Korea, a branch of the Korean unit of the German automaker, announced during a media event Monday that the new Mini Clubman, coming four years after the third-generation model in 2015, is equipped with upgraded design features and improved driving performance.

“This face-lift model for the third-generation Mini Clubman is more practical and fancier than the one released four years ago,” said Na Jeong-hoon, head of Mini brand management at Mini Korea. “We are going toward selling 10,000 vehicles this year for the first time.”

Between January and September this year, BMW Group Korea sold a total of 7,438 Minis, up 9.3 percent from 6,803 units during the same period last year.

While traditional Mini models have been popular with female drivers and those in their 20s and 30s in Korea, Na said the Clubman series has drawn interest from people in their 30s and 40s and married couples.

The Clubman series, which has so far taken up 21.2 percent of all sales for Mini models in Korea this year, has the largest models in the Mini lineup.

The latest edition comes in an Indian Summer Red color and is offered with adaptive LED headlights and a larger frontal radiator grille. With Union Jack-styled taillights, Mini Korea said the largest model in the Mini lineup contains an elegant and delicate design compared to its predecessor.

The new model, offered in gasoline and diesel versions, comes with seven-level automatic double-clutch transmission and larger-sized alloy wheels. Thanks to those upgrades, the face-lifted Clubman is rated at up to 192 horsepower and 28.6 kilogram-meters (206.9 pound-feet) in torque for the gasoline trims and up to 190 horsepower and 40.8 kilogram-meters in torque for diesel models.