President Moon Jae-in delivers his address at the National Assembly on Tuesday to explain the government’s plan for next year’s budget and agenda. [BYUN SUN-GOO]

President Moon Jae-in on Tuesday vowed to complete his reform of the criminal justice system, blaming the prosecution’s lack of integrity for his predecessor’s abuse of power.

At the National Assembly, Moon also explained the need for the country’s largest-ever budget next year and his vision for the remaining 31 months of his term.

Moon addressed lawmakers in the morning to explain the government’s plan for next year’s budget and agenda. It was his fourth budget speech at the National Assembly and the first visit to the legislature since the political turmoil surrounding key ally Cho Kuk, who lasted as justice minister for 35 days.

“The time has come for our administration to prepare for the final two years and a half,” Moon said in the speech.

“I have once again felt the people’s desires for fairness and reform,” Moon said, referring to the scandal surrounding former Justice Minister Cho. A self-professed champion of prosecutorial reform, Cho was forced to relinquish his post in the cabinet over investigations into his children’s academic careers and suspicious family wealth dealings.

“The people demand that the leaders of our society demonstrate a higher sense of fairness,” Moon said, without directly discussing the scandals surrounding Cho. “As the president, I feel heavily responsible.” 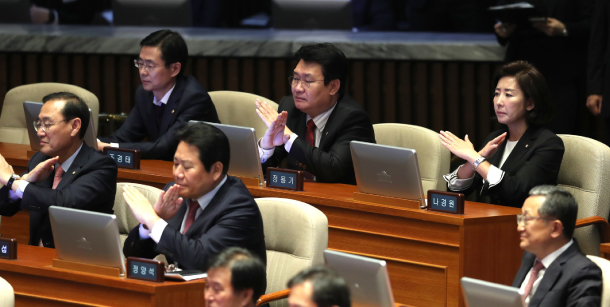 Moon promised an overhaul of the college admissions system, noting that “the public was most hurt by inequality in education.”

The president also vowed to continue his campaign to reform the prosecution. He urged the National Assembly to quickly approve pending bills, particularly a plan to create a new investigation agency to probe crimes committed by high-ranking officials.

“There is opposition to the need for the new agency,” Moon said, “but I want to ask what other alternative we have, if the prosecution fails to hold itself accountable for wrongdoings committed by its own members.

“The new investigation agency is also extremely meaningful as an organ to probe corruption committed by presidential relatives and associates,” Moon said. “If the law enforcement bodies functioned properly to investigate any abuse of power and hold those responsible accountable, we would have not experienced the presidential scandal [of Park Geun-hye].”

Moon said the new investigation agency will improve transparency among senior public servants, starting with the ones serving in his administration.

In the speech, Moon also promised to listen to people with different opinions and reflect on himself. For the sake of national unity, Moon vowed to meet more frequently with leaders of all political parties.

In the first part of his address, Moon explained the need for a “bold” expansionary economic policy. “Unless we counter the situation properly now, we will end up paying a far higher cost in the near future,” Moon said.

According to Moon, the government wants to implement a budget of 513.5 trillion won ($438.7 billion) next year. That largest-ever amount is 9.3 percent higher that this year’s 469.6 billion won budget. The budget proposal was submitted to the National Assembly on Sept. 3.

Moon explained the need to spend so much next year. “The state budget must play an active role as a breakwater to stop the waves from outside,” Moon said. “The expansionary policy for next year is a must, not an option.”

“Over the past two years, I was able to lay the foundation to create a country in which all people prosper based on the pillars of innovation and inclusiveness, thanks to the role of fiscal policies,” Moon said. “The outcomes are just about to be produced. In order for our economy to overcome outside tensions and regain vitality, the state budget must continue playing a key role.

Korea’s national debt-to-GDP ratio will not exceed 40 percent even after the 2020 budget plan is implemented, Moon said. “That is much lower than the average 110 percent for the member countries of the Organisation for Economic Co-operation and Development,” Moon said. “Our fiscal soundness is ranked at the top.”

As Moon entered the National Assembly, lawmakers from the ruling Democratic Party (DP) gave him a rousing welcome. Opposition lawmakers, including those from the Liberty Korea Party (LKP), stood up to greet him but gave no applause.

Moon received 28 rounds of applause during his speech all from the DP lawmakers.

He gave his first budget speech to the National Assembly in June 2017, immediately after his inauguration the previous month, and presented a supplementary budget proposal. He gave another in November 2017 and last year.

The ruling and opposition parties were split over Moon’s speech, particularly over the largest-ever budget proposal and prosecutorial reform.

While the DP and the government said expansionary spending was crucial to reduce economic uncertainties caused by U.S.-China trade frictions and Japan’s export restrictions, the LKP and Bareunmirae Party said the plan will increase government debt.

The LKP was particularly sensitive about the political timing. LKP Chairman Hwang Kyo-ahn said Monday that the largest-ever budget is for pork-barreling policies to “buy votes with cash” ahead of an April general election.

The DP and the LKP were also split about Moon’s campaign to weaken the prosecution’s powers by establishing the new investigation agency.

“When I heard Moon saying ‘legitimate inequities and privileges,’ I almost choked,” Hwang said. “He was giving guidelines about various illegalities committed by the Cho family.”

Rep. Na Kyung-won, floor leader of the LKP, said Moon’s speech failed to persuade the public. “The highlight was Moon’s rush to justify the new investigation agency,” she said. “He wants to turn around the situation with that initiative, but his impatience may spoil the matter.”