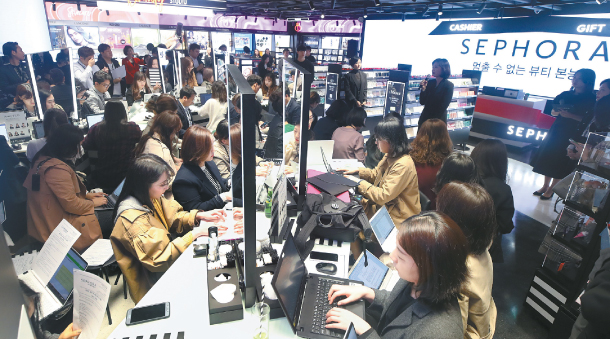 Kim Dong-ju, Sephora Korea general manager, discusses the opening of the company’s first store in Korea at Parnas Mall in southern Seoul on Wednesday. The Paris-based multinational chain plans to expand the number of shops to 14 by 2022. [YONHAP]

The Paris-based chain brought in some 110 beauty brands to Parnas Mall in southern Seoul. Sephora said it will open 14 stores in Korea by 2022, where it will offer foreign brands Koreans who once had to travel abroad to buy or buy online and wait.

Sephora provides a makeup trial service and beauty advice from its beauty advisers, who come from a diverse range of countries, including the United States and Australia. Kim hopes Sephora will function as a platform for local indie cosmetics brands to enter the global market.

Sephora said it will boost its online channel by making an app available next year. It currently only offers an online store.

Korea is Sephora’s 10th Asian market. It entered China in 2005 and Singapore in 2008. Sephora said it waited to enter the Korean market until local consumers became more accustomed to shopping in multi-brand spaces. As Korean consumers have sophisticated tastes, Sephora spent around three years developing the lineup for the Korean store, according to Kim.

Sephora suggested it had been more careful with the Korean market and made sure to adopt a localized strategy to avoid a replay of its embarrassing retreat from Japan in 2001.

The localization strategy in Korea includes boosting the point system based on consumer purchases and expanding the color cosmetics and perfume markets, which are relatively small in Korea, according to Kim.

Sephora plans to open a second store in December, in Myeongdong in central Seoul. A third store will open in Sinchon, western Seoul.

Sephora Korea faces an uphill battle, with the industry dominated by companies like Olive Young and Shinsegae Group’s Chicor.

“Sephora will be able to have competitiveness over local health and beauty stores by introducing different product lineups,” said Jade Lee of Euromonitor International Korea.