Jung Yu-mi has a whole new perspective: The ‘Kim Ji-young, Born 1982’ star on her trolls and playing a mother for first time

Jung Yu-mi has a whole new perspective: The ‘Kim Ji-young, Born 1982’ star on her trolls and playing a mother for first time 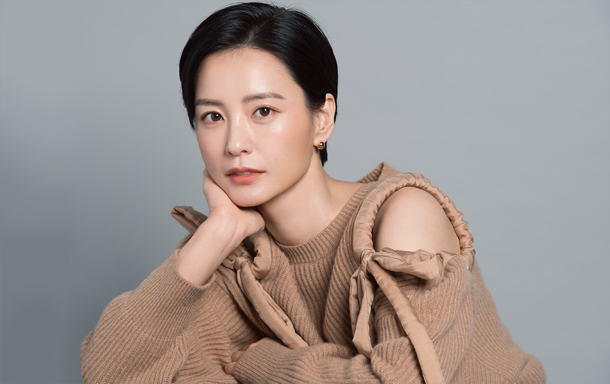 After showing her true self on various reality TV programs in recent years, actor Jung Yu-mi has cultivated a sweetheart image that she wasn’t able to portray as an actor. Her most recent role - Kim Ji-young in the controversial movie “Kim Ji-young, Born 1982,” adapted from the bestselling novel that triggered a fierce battle over sexism in Korea - may take that sweet girl image away.

The novel, written by Cho Nam-joo, tells the story of an ordinary Korean woman in her 30s, juggling work and family while facing gender discrimination at different phases of her life. The book was praised by many, but at the same time, faced considerable criticism from anti-feminists. Bitter reproaches even reached Jung’s social media accounts last September when the news was announced that she was cast to play the film’s lead role. Her Instagram account was instantly flooded with hateful comments from misogynists.

Jung, who had an interview with the Korea JoongAng Daily prior to the film’s release on Wednesday, says she had other options other than playing the controversial character, but the script “was the story that moved me the most.”

Despite all of the hateful comments aimed towards the film and herself, Jung managed to remain positive about the role.

Jung said that although the online chatter against her seemed endless, she believes that there are many more people with other opinions who decide to stay quiet.

“There are other voices that are not as loud or that choose to stay invisible on the internet,” Jung said. “And I don’t believe that all we see and hear in the media really reflects [the totality of] public opinion.” 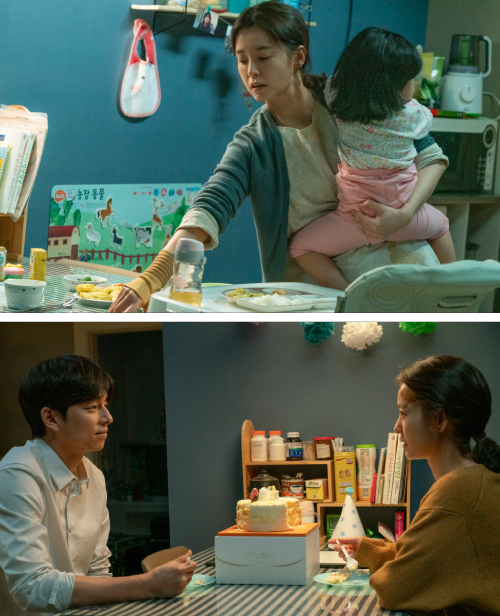 Scenes from the film. At top, Ji-young tries to do housework while also taking care of her baby. Above, Ji-young discusses resuming her career with her husband. [LOTTE ENTERTAINMENT]

The book reignited a fierce debate about gender inequality in Korea. Critics, especially men, objected to the story, arguing that they “didn’t quite understand” the possible hardships an average Korean woman faces in contemporary Korean society. The anecdotes that Ji-young perceives and experiences herself - gender discrimination, the hardships of domestic chores, and sacrificing her career for her child - failed to register with them.

Kim Ji-young, born in 1982, is indeed an average Korean woman who gets a job in a PR agency after graduating from college. Although she is a competent worker, she quits her job a few years after getting married to take care of her newborn child. Her husband, although he is from the same college, has been earning a higher income than Ji-young and eventually he becomes the sole breadwinner of the household.

Jung told the press that her family was the first thing that came to mind after reading the script. More specifically, her mother and grandmother, as well as her female friends with children.

“I think I may have neglected the real predicaments of those close to me, who I was reminded of through Ji-young,” she said. “That is why I felt that I had to do it. I have never lived the life of Ji-young. I’m not married, nor do I have children. And I took my mother and grandmother and their roles in the family for granted. I overlooked their hardships just because I was living a busy life of my own. [I believe] this was a character that I had to play at one point of my career and thankfully, it came to me.”

According to Jung, when she told her friends with children that she was going to play Ji-young in the film, those who had already read the book told her that they couldn’t wait to see her play a mother.

“They commented how relatable the book was [to me],” Jung said. “So I’m actually very curious to hear their reviews, especially my friends who are raising children themselves.”

Although Jung didn’t know anything about being a mother, she says she received a lot of help from director Kim Do-young, who has children of her own.

“The little details matter so much in the film,” said Jung, “and I didn’t want to miss that just because I’m not a mother. The idea of having baby food stains on Ji-young’s clothes, displaying an array of baby products, such as their own laundry detergent and so on, all came from director Kim. For instance, in the scene where I push the baby stroller back and forth with my feet while sitting on a bench - I didn’t know it could be moved with one foot, but Kim told me that she had done it a lot.”

For the emotional scenes, Jung says she had many discussions with the director and also received a lot of help from the book. On the night before shooting an important scene, Jung turned to the passages in the book that described the mind of Ji-young more vividly and tried to take the emotions with her to set.

“The way I interpreted Ji-young’s trances was that she grew up seeing her mother and grandmother face their own difficulties, and what she had to go through [when she was treated differently than her younger brother, at work or when she had to quit work due to her child],” she said.

“Even if she wasn’t exactly aware of what was wrong or may have never felt that she faced any particular discrimination, unconsciously she knew that it existed and all those things had been building up inside of her until one day, what she felt was manifested in that form.”

Before Jung acted out the scene where she turns into her maternal grandmother, actor Ye Su-jeong, who briefly appears in the film as Ji-young’s grandmother, personally recorded the lines for Jung to help her prepare.

Unlike the book, however, the film ends on a more hopeful note, in a sense that current society is susceptible to change through the life of Ji-young.

“The film takes on a similar tone and atmosphere of the book, but there is also a certain empowerment of a film that can influence people,” said Jung. “Since the story really touches on the people living their everyday lives, I thought it would be better if there is hope [in the end]. I don’t think I could have done this role if the film had a sadder or more pessimistic ending.”

Although Jung had said she didn’t care about the haters, she did admit that it was startling to see so much ruckus erupting over this film. But the actor has neither taken action or responded to online comments.

“I wonder if this will ever happen to me again,” Jung said. “But I just don’t want the film and its message to be distorted in any way. I certainly don’t want to be a cause of that.”