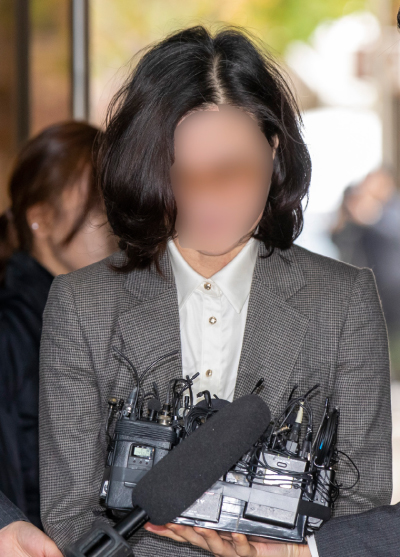 Chung Kyung-sim, wife of former Justice Minister Cho Kuk, attended a hearing at the Seoul Central District Court Wednesday to challenge the prosecution’s request to put her behind bars as it investigates corruption allegations against her.

Chung, a professor from Dongyang University, entered the court building in southern Seoul around 10:10 a.m., making her first appearance before the press since the prosecution started its probe 57 days ago. Chung is being investigated for possible irregularities in her daughter’s admissions application to medical school and alleged corruption in managing the family’s wealth.

Following dozens of raids including her residence and seven rounds of questioning of Chung, the Special Investigation Department II of the Seoul Central District Prosecutors’ Office asked the Seoul Central District Court on Monday to issue a warrant to detain Chung. In its warrant application, prosecutors listed 11 charges against her, which they say require pretrial detention. They also claim that evidence destruction is a worry.

About 100 reporters asked Chung various questions, but she only replied, “I will faithfully face the hearing,” before entering the building.

For her seven rounds of questioning over the past two months, Chung avoided the press by entering and leaving the Seoul Central District Prosecutors’ Office in southern Seoul via an underground parking lot.

But on Wednesday, the court did not make any such arrangements for her. Broadcasters aired her arrival live, but some chose to show her face pixelated, as did some newspapers, including the JoongAng Ilbo.

Judge Song Gyeong-ho started the hearing around 11 a.m. to hear arguments from both sides. The hearing was not open to the public.

Chung has formed an 18-member team of defense lawyers, many former judges and prosecutors. About six of them entered the courtroom with Chung on Wednesday.

After the hearing ends, Chung will await a ruling at the Seoul Detention Center or a detention facility at the Supreme Prosecutors’ Office.

“If the judge makes a quick deliberation, the outcome can be out by 10 p.m., but Chung’s case is a highly political one. It is likely that the judge will have an overnight deliberation and the outcome will come out early the next morning,” said a judge-turned lawyer.

The Seoul Central District Court has two judges in charge of warrant hearings, and Chung’s case was assigned to Judge Song based on an electronic allocation system.

Song has a recent history of granting warrants to detain suspects in high-profile cases, citing concerns of evidence destruction. In May, Song allowed detentions of two Samsung executives for accounting fraud.

Earlier this month, Song also granted the prosecution a warrant to detain a senior superintendent of the police suspected of abusing his power to dismiss complaints against K-pop celebrities, including former boy band Big Bang member Seungri, and their business partners who operated nightclubs.

Another judge, Myeong Jae-gwon, presided over a warrant hearing for Cho Kuk’s younger brother. On Oct. 9, Myeong struck down the prosecution’s warrant request, saying the allegations against the younger Cho were “open to doubt” and enough evidence had already been collected. The younger Cho’s poor health was also cited.

After Cho’s resignation from the justice minister post last week, Chung’s health became an issue. According to Chung’s lawyers on Oct. 15, she was recently diagnosed with a brain tumor and exhibited symptoms of a stroke. To postpone a round of questioning, Chung submitted a document to the prosecution from an orthopedic clinic with that diagnosis, but prosecutors said it was insufficient. She attended two more rounds of questioning last week.

Around 1 p.m., Song announced the court would recess for lunch. Chung and her lawyers reportedly ate delivered food in a waiting room. The session resumed at 2:15 p.m. and ended at 5:50 p.m.