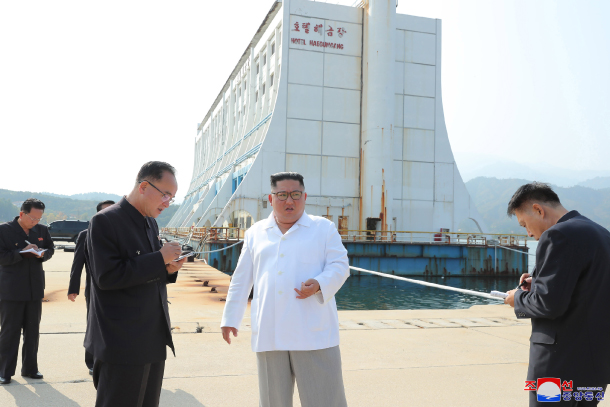 North Korean leader Kim Jong-un, center, talks with an official during his visit to Mount Kumgang in a photo released by the Korean Central News Agency on Wednesday. [YONHAP]

Kim’s bombshell instructions, delivered during a tour of the Mount Kumgang resort, were a repudiation of one of the two main economic ventures between the two Koreas - the other being the Kaesong industrial park - and a major departure from the inter-Korean policies of his father and the regime’s previous leader, Kim Jong-il.

After inspecting various hotels and tourist facilities, Kim panned the aesthetic quality of the buildings, which he labeled as “not only very backward in terms of architecture but look so shabby as they are not taken proper care of,” according to an English-language report from the North’s official Korean Central News Agency (KCNA). This was followed by a “sharp criticism of the very wrong, dependent policy of the predecessors who were going to rely on others when the country was not strong enough” - a seeming condemnation of his father’s decision to partner with the South Korean company Hyundai Asan in 1998 to attract South Korean tourists to the area.

Kim then “instructed to remove all the unpleasant-looking facilities of the south side with an agreement with the relevant unit of the south side” and ordered their replacement with “new modern service facilities” built “our own way” that would complement the mountain’s natural scenery. North Korea will “always welcome our compatriots from the south” if they want to visit Mount Kumgang, Kim added, but “what is important is for our people to have the shared view that it is not desirable to let the south side undertake” development of the resort.

Starting in 1998, South Korean tourists visited the scenic mountain resort in the thousands, first by cruise ships and then also by land through the demilitarized zone.

In July 2008, however, a female South Korean tourist was shot and killed by a North Korean guard at the resort, leading Seoul to suspend all tours, followed by the North’s expulsion of South Korean workers from the area. By then, Hyundai Asan and the South Korean government had invested approximately 994.7 billion won ($851 million) to build the necessary infrastructure, amenities and cover land rental costs, according to the Unification Ministry.

Yet the potential for a revival of the twin projects - in which the South’s property investments remained intact, albeit unmanaged - looked ripe as inter-Korean ties warmed up last year. When South Korean President Moon Jae-in traveled to Pyongyang for his third summit with Kim in September, the two leaders jointly pledged to normalize the two projects.

The lack of reciprocation from the South after Kim announced he was willing to restart the Kaesong Industrial Complex and Mount Kumgang tours “at any time” in his New Years’ Address in January may have induced Pyongyang to abandon confidence in South Korea.

Testifying to this was Kim’s overt denial that the Mount Kumgang tourist zone is a “common property of the north and the south and it is the symbol and epitome of the north-south relations, and that the tour of Mt. Kumgang would not be possible without the development of the north-south ties,” notions which he said were based on a “misguided understanding.”

Kim expounded on his goals to connect Mount Kumgang to a larger belt of tourist zones that includes the Masikryong Ski Resort - one of Kim’s first major construction projects since he took power in 2011 - and the Wonsan-Kalma coastal tourist area, a beachside resort under development that was reportedly the subject of a major investment offer from the United States during bilateral denuclearization negotiations in Stockholm earlier this month.