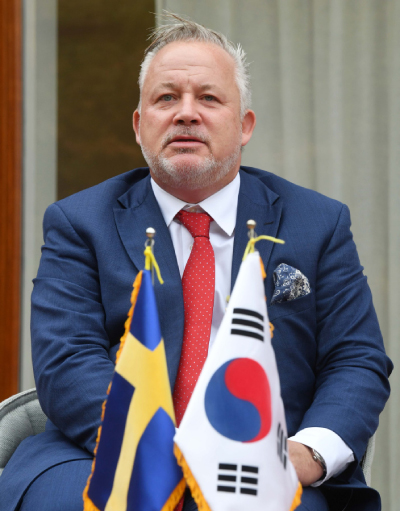 Kent Harstedt, Sweden’s special envoy for the Korean Peninsula, speaks at a press conference at the Swedish Embassy in central Seoul on Wednesday on the North-U.S. denuclearization negotiations. [YONHAP]

Stockholm plans to send invitations to Pyongyang and Washington for more working-level talks, said Sweden’s envoy for the Korean Peninsula during a visit to Seoul Wednesday.

“We will be offering ourselves to support the ongoing process,” said Kent Harstedt, Sweden’s special envoy for the Korean Peninsula, in a press conference at the Swedish Embassy in central Seoul on the North-U.S. denuclearization negotiations. “We will issue new invitations to the two sides for new meetings at the time agreed upon by the two parties.”

Harstedt continued, “It will of course be up to the two parties to decide the timing of such a meeting, but we will remain proactive from the Swedish side to encourage them to meet.” He noted that “right now […] it’s a historic window of opportunity and those opportunities might not last forever.”

North Korea and the United States held their first working-level talks since the Hanoi summit in late February on Oct. 4 and 5 at the Villa Elfvik Strand in Stockholm, with the support of the Swedish government. Stephen Biegun, the U.S. chief nuclear negotiator, held his first meeting with his new North Korean counterpart Kim Myong-gil, a former ambassador to Vietnam. However, Kim afterwards said the talks had broken down, though the U.S. State Department said that the two sides had “good discussions.”

Harstedt said, “It was a good meeting, it was many hours, and they had the opportunity to listen to each other and to have a dialogue together and were not interrupted. This was a very important message I think.”

Despite perceptions that the talks were “interrupted,” Harstedt said that it was “a full meeting and actually lasted a little bit longer than planned.”

Harstedt said he “respects” Pyongyang’s assessment of the recent talks and that, “At the end of the day, Ambassador Kim Myong-gil expressed their disappointment in the results,” adding they may have had “different expectations from the negotiations.”

Nonetheless, Harstedt said that he was “cautiously optimistic, based upon the feeling that there is a will from both to actually move in this process.”

Harstedt pointed out that Sweden is “not in the negotiating room” and can only play the role of a “neutral and honest broker” as a “facilitator” and “icebreaker” since it has the “trust” of both North Korea and the United States. He continued, “It’s not really up to us - they need to do their thing together.”

Harstedt said that the Swedish side offered to provide a venue for another meeting in two weeks. But Sweden has yet to hear a response from the North.

“We are ready to issue that kind of invitation from my foreign minister for them to come again,” he said. “From our side, we definitely will try to convince to move on in the process and take the next step.”

Sweden has “very good working dialogue” with North Korea, he said, adding, “We feel that they have an honest dialogue with us, and that is the foundation of the trust which we feel we have.”

Likewise, he pointed that there are many decades of distrust between Washington and Pyongyang, adding that is why building up trust is necessary, because they are negotiating “very sensitive and difficult issues.”

“In this journey, that is why every step is important to build that kind of level of trust,” said Harstedt. While there may be setbacks, he said the negotiation process will enable peace and an “opportunity for economic development, and of course, also in the long term, regional security and prosperity.”

“Right now all the efforts are very much focused on encouraging the U.S. and DPRK coming forward on the working-level process,” he said, referring to the acronym for the North, the Democratic People’s Republic of Korea.

Harstedt, who first visited Pyongyang 25 years ago, added, “I have no doubt that along the road this process will open up and there will be many parties involved in the long-term solution of the peace on the Korean Peninsula.”

Harstedt held talks with his South Korean counterpart Lee Do-hoon at the Ministry of Foreign Affairs in central Seoul on the same day to discuss the North-U.S. talks in Stockholm.

Lee expressed hopes for continued cooperation with Sweden in the process toward denuclearization and the establishment of permanent peace on the Korean Peninsula, according to the Foreign Ministry.