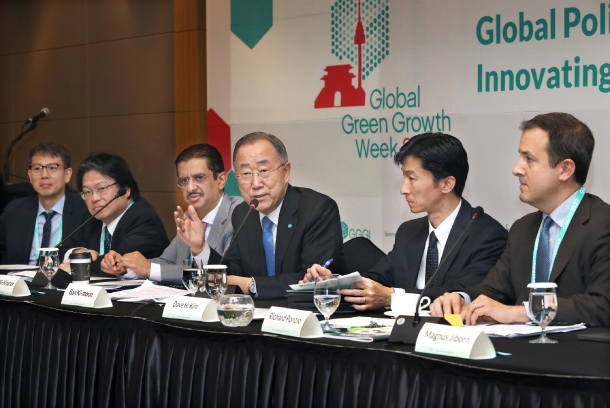 Ban Ki-moon, center, chair and president of the Seoul-based Global Green Growth Institute and former secretary general of the United Nations, delivers his keynote address during a session at the Global Green Growth Week on Wednesday at the InterContinental Seoul COEX hotel in Gangnam District, southern Seoul. [PARK SANG-MOON]

The GGGI, an international inter-governmental organization that aims to support and promote green sustainable growth across the world, announced in a press release that Korea was the sixth-highest performer out of 32 Asian countries on the index, which tracked performance in four dimensions: efficient and sustainable resource use; natural capital protection; green economic opportunities; and social inclusion.

The GGGI noted that the so-called Green Growth Index is aligned with the United Nations Sustainable Development Goals, the Paris Agreement and the Aichi Biodiversity Targets, and is the “first index to benchmark green growth performance against the targets of these international agreements.”

A total of 115 countries were measured on the index, but their ranks were allocated according to their geographical regions - Europe, Asia, Oceania, the Americas or Africa - meaning there were no global ranks.

If a country had no score for at least one of the four dimensions due to a lack of data, that country was not included in the ranking, the institute continued.

In order for South Korea to improve its ranking on the index, which will be updated annually, the country was advised to increase soil biodiversity, the share of key biodiversity areas to total protected areas and “significantly” reduce carbon dioxide emissions from burning fossil fuels, such as in the transport and energy sectors.

The Green Growth Index was revealed on the third day of the weeklong Global Green Growth Week, a set of green growth programs organized by the GGGI at the InterContinental Seoul COEX hotel in Gangnam District, southern Seoul.