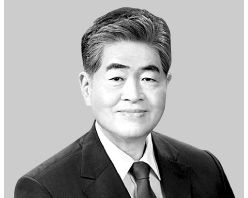 Younghoon David Kim
The author is the honorary chairman of the London-based World Energy Council and chairman and CEO of Daesung Group.

If, as scientists say, the world has been hotting up in recent decades, then the debate about the consequences and the need for drastic action has reached a boiling point this year.

Greta Thunberg, the teenage activist who launched the youthful “school strike for climate” protest, was nominated for the Nobel Peace Prize, and the group Extinction Rebellion has been grabbing headlines with civil disobedience stunts in Britain and elsewhere designed to pressure governments in advanced countries.

As we have known for some time now, to mitigate climate change, countries must drastically reduce carbon pollution by the middle of the century. But it seems that the political will is lacking in many countries to make carbon reduction the priority in energy policy. Much is being done, but it is too little and being done too slowly.

That’s the bad news. The good news is that it is possible to reduce the amount of energy used simply by making some changes that will not reduce the heat, light and other services we obtain from it. Furthermore, in doing so, we can cut greenhouse gas emissions by as much as half. In the United States, the American Council for an Energy-Efficient Economy (Aceee) says that the United States could save $730 billion in energy costs by 2050 with policies to reduce energy waste from buildings, factories, vehicles and appliances.

This means that, even before we consider giving up all fossil fuels, air travel and meat eating, energy efficiency can go a long way to solving the problem.

This claim is supported by the forward-looking “World Energy Scenarios 2019” study produced by the World Energy Council. It shows that energy efficiency gains are critical to the management of energy demand.

This is very significant for Korea where we consume energy at far higher rates than other similar-sized countries. Our primary energy use and per capita energy use, for example, is 20 to 30 percent higher than that of Germany, France or Japan. It is more than double that of Britain, Spain and Italy. To look at this in another way, our energy consumption per unit of GDP (usually $1,000) is more than twice the Organisation for Economic Cooperation and Development average. Further, while most OECD countries are “decoupling” in the sense that their energy use is declining as their economies grow, Korea’s energy use is increasing.

According to the Aceee report, almost half of the forecast reduction in emissions could be achieved if we were to make transport more fuel efficient. Similarly, energy efficiency in buildings and in the industrial sector could account for one-third and one-fifth of reductions respectively. These estimates apply to the United States, but we could expect a similar breakdown for Korea.

And energy efficiency itself could result in other significant benefits, such as job creation, cleaner air and improved health.

The idea of energy efficiency has been around for some time, but what does it mean in practice? First, there would need to be an accelerated transition in transport to electric vehicles along with improved fuel economy, more efficient aircraft and so on. Savings in buildings would result from smart control technologies, refitting of buildings to reduce energy waste, energy efficient new buildings and rigorous new standards for appliances. The encouraging part of this picture is that the technologies to make it happen are here already and are affordable.

None of this will work, however, without the willingness of governments to implement the appropriate policies. Government already views energy efficiency as desirable and seeks to nudge industry and consumers into energy-saving habits. But this is not enough. The problem with energy efficiency is that it is seen as a negative concept — in the sense that it involves the non-use of energy. In fact, it should be seen as a positive. Countries should conceive of efficiency as the “first energy resource” before investing in other energy resources and related infrastructure. They should also plan policies and measures around annual efficiency targets and ensure that laws are enforced and standards kept.

For example, governments could develop optimum efficiency standards for appliances and codes for buildings, as well as provide funding and other incentives for upgrading existing buildings. At the same time, governments should invest in electric options wherever possible in industry, in buildings and in transport. Governments should also keep providing support for research and development into smart and affordable technology that can reduce energy waste.

Of course, in one way or another, most countries are moving in this direction. Or, if they are not, their upcoming leaders are aware of the needs. But, as the protesters now so vociferously point out, not enough is being done. Energy efficiency can help dislodge this political lack of will for it helps frame the action in a way that is hard to argue with.

Of course, some of the necessary steps will be challenging. But the human race is hardly a stranger to challenges.