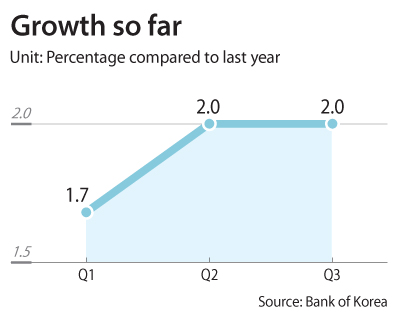 The economy grew at a slower pace than expected in the third quarter, making 2 percent growth for the year highly unlikely.

The Bank of Korea (BOK) said Thursday that the economy grew 0.4 percent between July and September compared to the previous quarter, hit by weak domestic demand and investment and the protracted U.S.-China trade war.

The announcement was closely watched since the third quarter result was a barometer of whether the country could grow by at least 2 percent.

The 2 percent level is considered psychologically significant as Korea normally manages to stay above it except for periods of grave crisis.

To reach 2 percent GDP growth this year, the fourth quarter must pull off robust expansion of at least 0.97 percent on quarter, according to Park Yang-soo, head of the BOK’s economic statistics department.

“For now, it appears that it won’t be easy to reach the 2 percent target,” Lee said during an audit on Thursday. “Still, it remains to be seen since there are different factors at play - such as the government’s efforts to push forward fiscal stimulus.”

The official growth projection by the central bank for this year is 2.2 percent, higher than predictions from financial institutions like the International Monetary Fund. That forecast is almost certain to be revised downward next month.

Finance Minister Hong Nam-ki vowed to exhaust as much government spending for this year as possible during an audit at the National Assembly.

Analysts said that the economy lacks momentum to deliver much growth in the ongoing final quarter.

“It would be challenging to achieve the 2 percent annual growth due to factors like lack of fiscal stimulus,” said Lee Young-hwa, an economist at Kyobo Securities.

“The major driver behind the stronger-than-expected growth in the second quarter - at 1 percent on quarter - was huge government expenditure and a base effect,” Lee said, “But as the government has already executed 77.4 percent of its budget, the government’s role would be limited.”

The central bank and think tanks attributed the downbeat results to soft domestic consumption and weak investment especially in construction.

“The moderation in quarter-on-quarter growth in the third quarter reflected a significant slowdown in consumption expenditure, which rose by only 0.4 percent quarter-on-quarter, compared to rapid growth of 1.1 percent in the second quarter,” said Rajiv Biswas, Asia-Pacific chief economist at IHS Markit in a statement.

Exports, however, showed signs of improvement as they jumped 4.1 percent on quarter, helped by the semiconductor and automobile sectors.