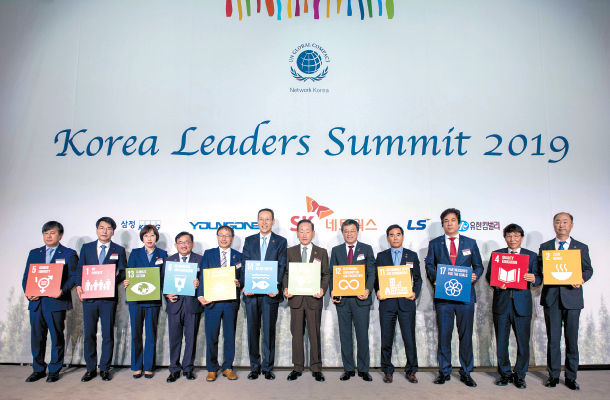 Lee Dong-kurn, president of UN Global Compact Network Korea, seventh from left, and Park Suk-bum, secretary general of the organization, sixth from left, pose for a photo with representatives of the 10 companies and institutions it selected to be a part of the so-called lead group for making exemplary progress in sustainable development during the Korea Leaders Summit 2019 held Thursday in Yeouido, western Seoul. [UN GLOBAL COMPACT NETWORK KOREA]

The Korean branch of the corporate sustainability campaign involving some 14,000 companies and institutions has been holding the summit every two years since 2011 to help companies pursue the sustainable development goals (SDGs) set by the UN in 2015. The UN goals include fighting poverty, hunger and climate change and achieving gender equality.

“The world is facing multiple challenges including climate change and corruption,” said Ban Ki-moon, honorary chairman of the UNGC Network Korea, in a keynote speech during the summit. “To tackle those problems and achieve sustainable social and economic development, everyone, including our companies, needs to take responsibility.”

Ban specially emphasized the need to fight climate change and openly criticized U.S. President Donald Trump, who announced that the United States will withdraw from the Paris Agreement on climate change.

“I’ve been saying this from before […] that Trump’s action is politically short-sighted, economically irresponsible, and scientifically wrong,” Ban said. “He will be standing on the wrong side of history.”

Ban added that he believes the United States will come back in the future to once again show global leadership.

While pursuing SDGs used to be thought of as a corporate responsibility activity to make a company look good, a survey by the UNGC Network Korea unveiled Thursday shows that the perception is shifting and firms are starting to see SDGs as a serious way to be more competitive.

Based on a survey of the top 100-listed companies on the Kospi, 29 percent of respondents said SDGs are pursued by their companies’ strategy planning team and 3.6 percent by the investor relations team.

“Unlike in the past, more companies are pursuing SDGs through teams other than corporate social responsibility teams, like strategy planning, which shows they are trying to incorporate SDGs into their business strategies,” a spokesperson from UNGC Network Korea said.

When asked whether they think pursuing SDGs is a must for companies, 26.3 percent replied with a strong yes, while 55.3 percent answered yes.

During this year’s forum, UNGC Network Korea launched a local “lead group” for the first time and awarded 10 companies and institutions that were selected to be a part of the group for their progress in sustainable business development.

President Lee Dong-kurn of UNGC Network Korea said he hopes the lead group will be a good example for other companies to follow suit.

Among the 10 members of the lead group, cosmetics maker Amorepacific was selected for introducing a model of sustainable lifestyle through its product lineup and campaigns while KT was selected for using digital technologies to solve social problems.