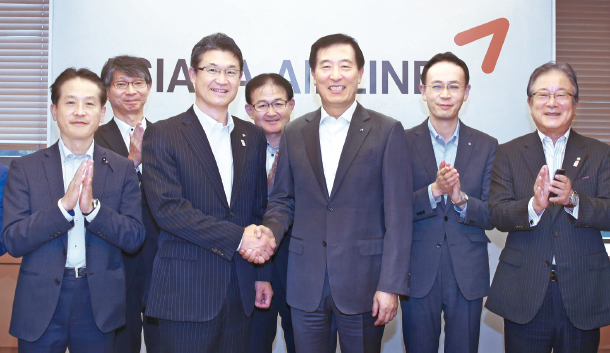 The governor of Miyazaki paid a visit to Asiana Airlines to discuss increasing frequencies between Incheon and the prefecture in southwestern Japan.

Asiana said in a statement Thursday that Shunji Kono had a meeting with Asiana Airlines President Han Chang-soo Wednesday at the company’s headquarters in Gangseo District, western Seoul.

The two discussed possibly increasing the number of Asiana flights to Miyazaki, a popular destination for Koreans visiting Japan, as the private sector in Japan and Korea work to improve relations between the two countries.

After Koreans started reducing travel to Japan in July, Asiana Airlines reduced the number of flights to Japan and diverted those aircraft to other routes.

“Korea is a precious neighboring country for Miyazaki, and we would like to continue our relationship with the country,” Kono said. “I hope many Korean tourists visit Miyazaki.”

Asiana said Kono, in office since 2011, has been a long-time supporter of favorable Korea-Japan relations. After Japan implemented export restrictions on materials bound for Korea, Kono introduced campaigns to welcome Korean visitors to his region while encouraging Japanese people to visit Korea.

“The currently frozen Korea-Japan ties must be solved at the private level by continuing trade relations,” Han said. “And in that respect, I sincerely thank Gov. Shunji Kono for visiting.”

Since opening the route in April 2001, Asiana Airlines has had the Incheon International Airport to Miyazaki Airport route for 18 years and current operates three each week to the Japanese destination.