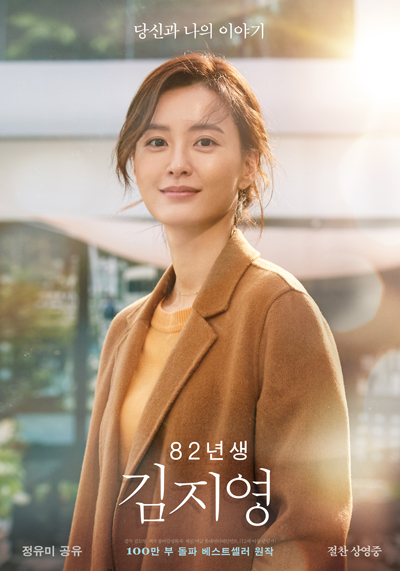 Despite concerns over the release of the film “Kim Ji Young, Born 1982,” the film whizzed to the top of the local box office on its first day in theaters, data from the Korean Film Council showed on Thursday.

An estimated 139,000 people saw the film on Wednesday at 1,354 screenings, knocking Disney’s “Maleficent: Mistress of Evil” to second place. Despite the film’s low review score on Naver - netizens gave the film a 5.41 out of 10 - the film has over 52 percent of total ticket reservations at local theaters as of Thursday afternoon.

Not only is the film doing well locally, but the character Kim Ji-young has seemed to have resonated with overseas film buyers as well, as the movie has sold its distribution rights to 37 territories, including Taiwan, Australia, Hong Kong, Vietnam, Malaysia and Singapore, the film distribution company Lotte Entertainment said on Wednesday.

“The chemistry between the actors and their exceptional performances made the characters come alive onscreen,” said a representative from a Singapore-based film distribution company.

The film, adapted from the bestselling book by author Cho Nam-joo, is about the discrimination a Korean woman has to endure in contemporary society as a daughter, wife, co-worker and mother.