All the best haunts for Halloween: Zombies have taken over right in time for the spookiest day of the year

All the best haunts for Halloween: Zombies have taken over right in time for the spookiest day of the year 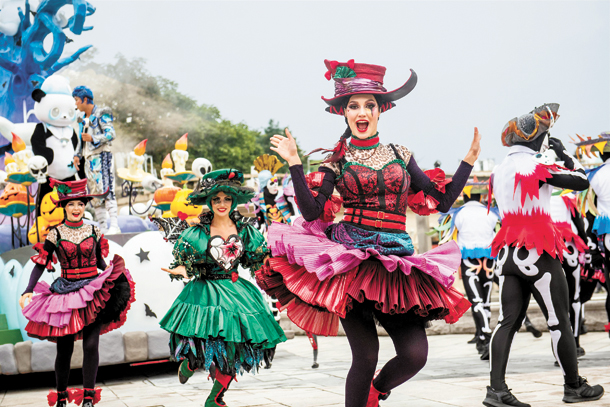 Halloween in Korea will be spookier and more zombie-filled than ever before, with local theme parks leading the way once again. While Everland and The Korean Folk Village in Gyeonggi and Lotte World in southern Seoul are some of the easiest ways to enjoy the Halloween vibe, a night out in central Seoul’s Itaewon neighborhood, where the streets are sure to be tightly packed with aliens, ghosts, ghouls and goblins, is sure to be just as fun.

Watch out for zombies

Everland, which has transformed into “Blood City” this Halloween, now feels like a gigantic film set for a scary movie. About 100 actors in zombie costumes are walking throughout the park giving guests a scare wherever they are. In an area called “Zombie Station,” you are transported into a cage in which experiments are being conducted on zombies, while the bus you take on the way there may be attacked by zombies. Expect to see zombies everywhere, including on some of the park’s famous rides.

Dinosaur-shaped structures are also all over the park, giving visitors the feeling that they are escaping a dinosaur park being attacked by a zombie virus.

Lotte World has also been running zombie-themed programs since last month. With more people getting used to seeing bleeding zombies walking around the park, the theme park has stepped up its level of scary - so be prepared to encounter some frightening figures. Lotte World is also screening a 4-D movie so that visitors can experience zombies with all their senses.

There is also a haunted mansion at Lotte World that is not for the faint of heart. Opened in July, the mansion is now considered the scariest thing at the theme park, and it is said that about 40 percent of the people who walk into the house give up in the middle.

At both theme parks, visitors can rent outfits and get professional makeup done to complete the perfect Halloween look.

If theme parks don’t sound like your idea of spooky fun, Itaewon never fails to provide Halloween excitement. For the past decade, people in costumes have come out to the streets decked out in costume in celebration of the holiday.

People in all kinds of creative outfits fill the streets of Itaewon, making each street feel like a parade. Many do go inside the bars and clubs to dance and party, but others also choose to spend time walking around outside to check out what people are wearing and take photos with everyone decked out in thrilling costumes.

Looking for a more toned-down way to get into the Halloween spirit? Try bar hopping inside a local hotel. The Westin Chosun Seoul’s Lounge and Bar is hosting their own Halloween party today in collaboration with whisky brand Macallan. The Macallan Edition No. 5, a newly-launched whisky option, will be available for purchase, along with glasses that can be inscribed with whatever you would like.

The Ibis Ambassador Seoul Myeongdong will host a party today as well and serve cocktails inspired by the scary holiday. The dress code is black and red and the best-dressed visitor will be offered the chance to win a variety of gifts.

Paradise City’s theme park Wonderbox is offering a family-friendly Halloween experience with all kinds of sweets from a food truck that young guests will surely be thrilled to see. 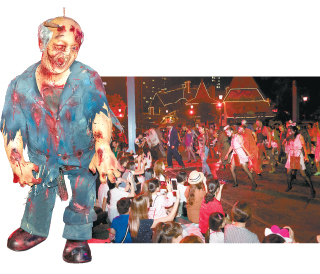 Those looking to make a last-minute international getaway in search of some goose bumps, Airbnb is offering a chance to stay in haunted houses all around the world.

One of the options is a large mansion in the U.S. state of Minnesota, where it is said that a hostess who used to throw parties died after having suffered for years due to disease. Another house is in Canada, where an Airbnb host claims that visitors have seen an angry female ghost and a male ghost in suit.

These rooms with scary stories are being offered at a discounted price for stays on Nov. 1 and 2 only. They cost just 31 dollars per night, excluding additional fees and taxes.

Worry no more about where to get your costume. Interpark, one of the largest online retailers in Korea, has become dedicated to making everyone’s Halloween a little spookier. It has prepared a variety of props and outfits, including temporary tattoos, hair accessories and costumes of popular movie characters including Superman and Spider-Man.

“Halloween Day has become a special festival that some people in Korea enjoy and that has pushed the demand for costumes and props up each year,” said an official from Interpark.

If you prefer to check out items in person, search for a party store, which are usually located in Gangnam District, southern Seoul, or Jung District or Jongno District, central Seoul, where wholesale markets still stand, such as Namdaemun Market. Use your imagination to mix and match the items you find to make a unique costume that you can’t find anywhere else. You can even find different colored and styled wigs to finish your look.

So those who don’t plan on dressing up can also enjoy the holiday, some retailers are offering Halloween items for a little bit of holiday fun.

Restaurant Mad for Garlic is offering diners the chance to make their own scary pizzas, by adding red chorizo and French fries to make their pizza suitable for Halloween.

Dunkin’ is selling products featuring the face of one of the most well-known scary movie characters, Chucky. Customers buying more than 10,000 won ($8.53) worth of food, drinks and more can buy a cushion for 4,900 won.