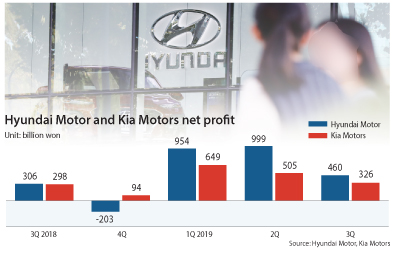 Hyundai Motor reported a 50 plus percent drop in net profit in the third quarter from the previous quarter despite higher sales as one-off expenses related to a class action lawsuit hit results.

According to the automaker Thursday, it posted 460 billion won ($392 million) in net profit, a 53.9 percent quarter-on-quarter decline. Compared to the same quarter last year, the figure is 50.5 percent higher, but the third quarter last year had been a low quarter due to a recall in the U.S. market and sluggish sales in major markets like China.

As Hyundai Motor had been on track for recovery in earnings this year, after suffering a net loss of 203 billion won in the fourth quarter last year largely due to the strong won and weak global sales, expectations were for around 1 trillion won in net profit.

One-off costs of 683 billion won held it back.

Hyundai Motor and Kia Motors, which is 33.9 percent owned by Hyundai Motor, recently announced a compensation plan, including a lifetime warranty for their recalled Theta II gasoline engine. The issue was raised in 2015 in the United States as the engine could lock up while driving and cause noise.

The compensation came as the automakers resolved class action suits with U.S. owners of Hyundai Motor and Kia Motors vehicles equipped with the problematic engine earlier this month. The carmakers said similar terms of compensation will be offered to Korean customers.

About 600 billion won of compensation was reflected in the June-September quarter for Hyundai Motor. Most of the rest of the one-off costs were related to incentives for workers in line with the latest wage deal.

Apart from the one-offs, sales grew by 10.4 percent year-on-year and by 3 billion won compared to the previous quarter to 26.97 trillion won. The company said that while the number of cars it sold actually shrank year-on-year, changing its product mix to be more SUV-oriented boosted revenue, along with weak won.

“Our profit growth has slowed temporarily due to one-off costs, however, in the fourth quarter, we are expecting recovery as production of the Palisade SUV will be increased and new models like the face-lifted Grandeur sedan and GV80 SUV from Genesis will hit the market,” said Choi Byung-chul, an executive vice president and head of finance and accounting at Hyundai Motor during a conference call with analysts on Thursday.

Hyundai Motor also said it will bolster its eco-friendly car lineup to further enhance its presence in the global market, especially in Europe, where environmental regulations are growing tough.

Norway has announced it is planning to prohibit the sale of gasoline and diesel cars by 2025, while some other countries, like France and Britain, have announced similar plans, though with a target of 2040, according to Hyundai.

Hyundai said it plans to sell more than 1.03 million eco-friendly cars including hybrid cars, electric cars and fuel-cell electric cars in 2025 from its Hyundai and Genesis brands. Including Kia Motors, it said the sales target is 1.67 million units.

To ramp up sales of its eco-friendly cars in Europe, Hyundai plans to release four new electric cars there over the next five years. One will be a sedan, one will be a van, while the other two will be SUVs.