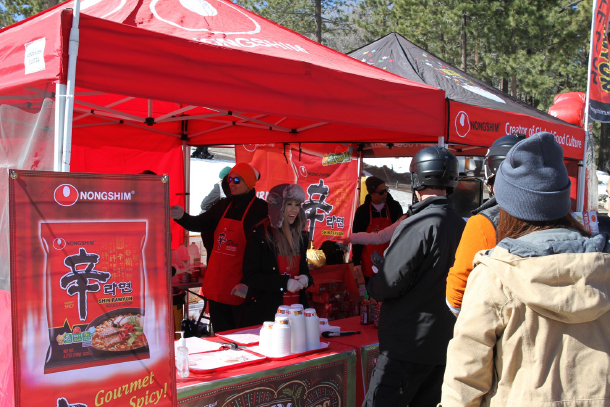 Nongshim introduces its products at a recent pop-up event in Los Angeles. [NONGSHIM]

Shin Ramyun is gaining popularity in over 100 countries worldwide as one of the leading food trends of Korea.

From Jungfrau, Switzerland, at the top of Europe, all the way down to Punta Arenas, Chile, Shin Ramyun travels across any borders.

Nongshim is aiming to spread the message “Produced by Nongshim, Consumed by the World” and become a global food enterprise.

In the United States, where noodles from all around the world compete, Nongshim has seen a significant increase in sales through supplying its products to over 4,000 Walmarts around America, as well as Costco, Kroger and other local marts.

It was mostly the aggressive marketing carried out by Nongshim that paid off in the end.

Special display shelves with the name “Road Show” were set up to provide tasting events for consumers.

Nongshim has decided to set up a second factory in Corona, California, following its Los Angeles factory which is planned to start construction in 2020 and expected to be up and running around the end of 2021.

Nongshim is experiencing success not only in the United States, but also in China as well.

What is more important is that Shin Ramyun’s taste was not localized and has competed against Chinese products to make its place on shelves and is now one of the best-selling noodle brands in China.

It is the typical spicy taste of Korean food that attracts Chinese people, along with the product design that features a Chinese character and its vivid red color.

Vietnam, where noodle consumption per person is the second-highest in the world, is another huge target for Nongshim, in order to expand into the Southeast Asian market.

Local distributors are great partners for Nongshim in selling its products, and there are special display shelves available in huge marts such as Coop mart, Big-C mart, and Aeon mart.

Another marketing technique is the operation of Shin Ramyun trucks around universities and setting up automatic noodle makers to allow customers to get more familiar with the product.

In the Philippines, there are pop-up stores set up inside huge shopping malls, and in Malaysia, products such as Halal Shin Ramyun are on the rise.

Since April 2011, Nongshim has set up specialized halal factory lines in Busan to expand to halal food markets and has acquired halal certification for its Shin Ramyun, Kimchi Ramyun and Vegetable Ramyun products.

Nongshim is not just a food producer in the domestic market, but has now stepped up to be a global food producer serving as a “food diplomat” for Korea.

“Any Korean living outside of Korea searches for the essence of what reminds them of Korea, and Shin Ramyun is always one of the foods that people remember. We hope to make it into a product that people around the world can enjoy and love serving,” said an official from Nongshim.