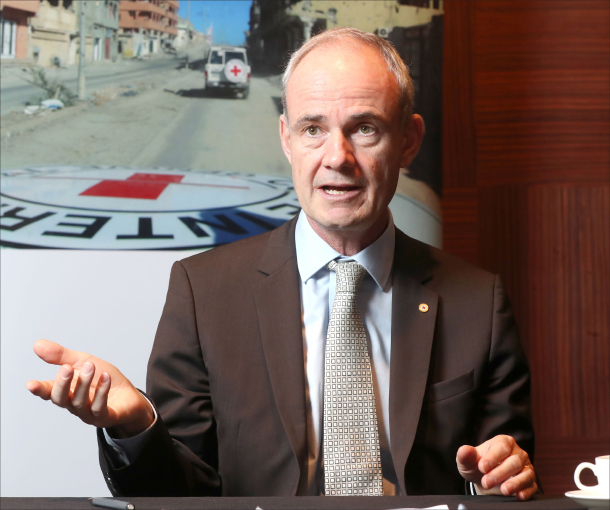 Gone are the days that humanitarian organizations solely rely on conventional modes of assistance such as emergency relief, said Gilles Carbonnier, vice president of the Geneva-based International Committee of the Red Cross (ICRC).

And that’s where South Korean companies can come in, Carbonnier stressed.

In a keynote address delivered to business leaders and CEOs at the 12th annual Dow Jones Sustainability Index International Conference on Tuesday at the Hotel Shilla in central Seoul, Carbonnier talked about exploring new partnerships with the South Korean business sector, like the kind the ICRC has with a Swiss high-tech university, which involves developing a new prosthetic foot for the war-wounded with greater functionality at a lower cost.

Hours before the conference, the Korea JoongAng Daily had a chance to sit down with Carbonnier to talk about the ICRC’s journey toward embracing digitalization and the group’s humanitarian work in North Korea. Carbonnier arrived in Seoul on Monday for his first official visit as the ICRC’s vice president and left Thursday.

Below is an edited transcript of the conversation.

A. In general, these meetings will deal more broadly with the relationship between the international community of the Red Cross, my organization and the Republic of Korea [South Korea’s official name]. We will certainly discuss our worldwide operations. We’re working in over 80 countries. That said, of course we will also discuss our activities on the Korean Peninsula, especially in the DPRK [Democratic People’s Republic of Korea, North Korea’s official name].

Do activities of the ICRC in North Korea get affected by the North’s diplomatic situation?

Even if we are not involved in politics because we are a strictly neutral humanitarian organization, our work is always affected by ongoing political developments. So we are always trying to do our best, utmost maximum given the space that is provided under specific political circumstances.

What kind of work does the ICRC do there?

We are involved in many different types of activities, most of which are held in partnership with the DPRK Red Cross society. We have major operations in what we call physical rehabilitation centers, where, for instance, we help people who lost a leg due to an accident from an explosion. We provide prostheses to the amputees, and we provide the North with technical assistance as well in order to train the staff and allow the physical rehabilitation centers to be able to provide essential assistance to the amputees.

A second activity is water provision in urban areas. We are helping to restore and upgrade water provision systems for people living in and around the city of Pyongyang to make sure that they can have access to safe and permanent drinking water. And sanitation is also part of the work.

Then we also assist the emergency care section of hospitals in their dealing with emergencies, and we also have a number of small projects to enhance food security, for instance, green house projects for the production of vegetables that can enhance the diets and the diversity of diets of the people [in the North].

We also have another important program to help address the issue with unexploded devices from the Korean War [1950-53]. We have been able to provide technical assistance to their experts through training. We have a training program in Cambodia, where [North Korean experts] go to learn about weapon decontamination.

[The ICRC’s Seoul mission later explained that the ICRC sponsored a delegation from North Korea to travel to Cambodia in January to meet with the Cambodian Mine Action Centre to learn about the country’s experience in clearing mines, bombs and other remnants of war.]

Let’s talk about your keynote speech at the Dow Jones index conference. I received a script of your speech in advance, and I think the most impressive part for me, personally, is how you’re going to talk about “smarter ways” to engage with the private business sector and how the ICRC wants to seek technological collaboration.

We have established a number of partnerships with businesses, especially in Switzerland and Europe. And we also now have, in Asia, a number of agreements with companies that are extremely innovative and help us produce new products and new services that are better adapted to the humanitarian response we provide across the world.

Here’s an example: We found a supplier in China that produces a solar lamp, and this lamp helps, for instance, Syrian refugees and other displaced people in crises get light during nights so they can be safer when they have to go out.

Another example is USB chargers. They can recharge [the users’] mobile phones so [the users] can stay connected even when they’re on the move due to their humanitarian crisis, and this is sometimes the most critical need — to stay connected with their families and to stay informed about the circumstances and get advice whether they should move or whether they should stay because often it’s them who can make the best decisions on their own protection. And these are things that are actually very cheap to produce, and they’re produced in good environmental and social conditions that very much adapt to what we call “the bottom of the pyramid.” You know, low-income countries.

So coming into South Korea, of course we know it’s a highly sophisticated and technologically advanced economy. South Korea is a world champion in terms of information technology, in terms of electronics, you name them. Today, we are witnessing a digital revolution where we also have to embrace digitalization in our responses in order to provide many powerful tools. We need to partner with companies that are producing the best products and services in a responsible manner because these innovations make game-changing improvements in the lives of people affected by crises.

How does that technological cooperation actually work?

So usually we look at the possibilities for companies to contribute, not only through philanthropic donations, which is one part but not the main part. A smarter relationship involves skills, know-how and expertise exchange. We have our experts working on data management and information technology, and they exchange their skills and know-how with companies. [The ICRC] also has discussions [with companies] on how to use technology in difficult crises, and sometimes companies are really interested in our expertise in managing difficult operations in conflict contexts, security and everything. Sometimes companies kindly offer us their services and goods [for free], and sometimes we buy them.

We’re seeing a lot of armed conflicts around the world today.

It’s a worrying trend because from the end of the Cold War to 2003 and 2004, the number of armed conflicts went down, and we were hoping to move toward a world with less armed conflicts and more peace, more security. But in 2010 and 2011, we saw a large increase in the number and intensity of conflicts. What I want to say is that we’re starting to say we have few humanitarian solutions to these humanitarian crises. There are only political solutions. And states have the responsibility to work hard to find political solutions. At the UN Security Council, we see that finding political consensus is very difficult.

So in the meantime, while people are suffering and dying, we do our utmost to provide them with lifesaving assistance and help them get out of aid dependency. We want to provide them with likelihood options through which they can regain some dignity and not be dependent on aid everyday for years and years. This is our philosophy.