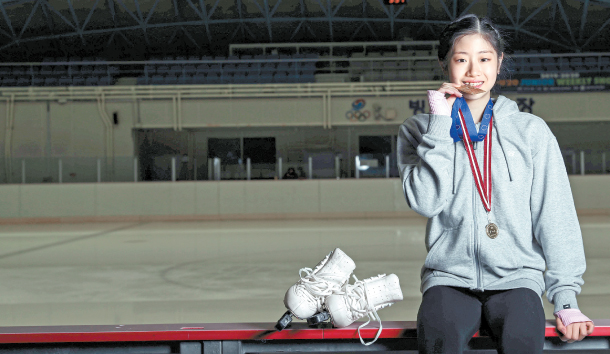 Lee Hae-in poses for a photo with one of her Junior Grand Prix gold medals at the Korea National Training Center ice rink in Nowon District, northern Seoul, on Oct. 16. [KIM KYUNG-ROK]

Since Kim Yuna retired from professional figure skating in 2014, Korea has struggled to find anyone to step into her skates. Fourteen-year-old Lee Hae-in may just be the one.

Lee may be young, but she is already following in Kim’s footsteps.

With her hair in a braid tucked to one side, Lee even looks like a young Kim.

“My mom braided it,” Lee said. “I’m not too overwhelmed by people calling me the second Kim Yuna. I’m glad [to be called that] and [hope to] continue to be called that.”

Lee is one of the “Yuna kids,” a generation of young Korean figure skaters who fell in love with the sport during Kim’s heyday.

For many of those Yuna kids, the figure skating dream started when Kim took gold at the 2010 Vancouver Olympics. For Lee, who was only five years old in 2010, that was a little too early.

But things changed three years later, when Lee was eight years old. At the time, she began watching clips of Kim’s performance while she was skating at an ice rink in Jamsil, southern Seoul. After watching Kim’s Les Misérables performance in 2013, Lee decided to become a figure skater. Lee started training on weekdays as well.

“During the 2014 Sochi Olympics, I set an alarm to watch it on TV,” Lee said. “She didn’t look like a human. I was amazed at how she did all that. They were moves I could never perform.”

Since then, Lee’s been training at the ice rink just like Kim. For seven years, Lee headed to the rink six times a week, every week, spending four to five hours there each time. Lee also started training on solid ground, like long distance running and stretching.
Two years ago, Lee had stress fracture on both of her feet and still didn’t stop.

“I really like running,” Lee said. “I’ve always been the last person running in the order in relay races. But since skating is faster, it’s more fun. The feeling of the wind passing through my body makes me feel cool and free.”

Just like in men’s figure skating, the women’s competition is currently focused on jumps. Lee is determined not to get caught up in the noise and excitement of big jumps, instead focusing on her overall performance.

“I can do all the three-turn jumps except the triple axel,” Lee said. “I’ve been continuously working on the triple axel. I think it’s better to perform the skills that I can do perfectly now, rather than try something that is not yet perfect.”

Her decision to focus more on her overall performance was clearly the right move, as she won a Junior Grand Prix event. Lee received the highest level of four in all the categories except in jumps during her free skate performance.

Just like Kim, Lee’s strength is in her performance rather than her jumps. She’s been receiving lessons with choreography and acting from Kim once a month, and Lee said that’s been a big help. In March, Lee signed a management contract with AT Sports, Kim’s management company.

Also, to improve on her choreography and acting, Lee’s been reading and listening to a lot of music from musicals.

“I listen to a lot of music from musicals like ‘Rebecca,’ ‘Wicked’ and ‘Mamma Mia!,’” Lee said. “I don’t really have much interest in pop music. I also like reading novels and poetry, so I left about six or seven book in my mom’s car to read while we’re moving.”

Rather than wanting to become a figure skater who wins everything, Lee said she wants to be a happy skater.

“Of course I want to do well at the Junior Grand Prix final in December and compete at the 2022 Beijing Olympics,” Lee said. “But the one thing I want to achieve the most is to skate for a very long time.”