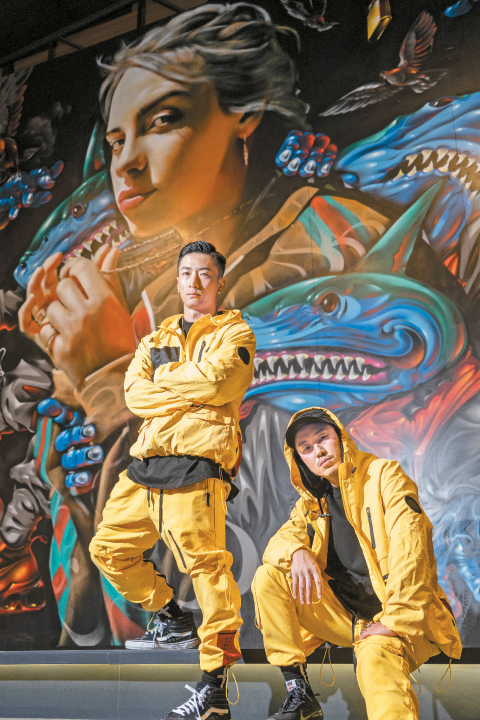 Artists often talk about rebellion and disobedience, but it’s the foundation for Vatos Society. A street art collective comprised of a diverse range of creators, including a fashion designer, graffiti artist and a singer, Vatos Society has worked hard to make a name for themselves in the streets across the country. And until Nov. 3 at Baesan Korea, a gallery and cafe located in Seongsu-dong, eastern Seoul, people can see the fruits of their endeavors through an exhibition, also titled “Vatos Society.”

Put together by street fashion brand Stigma to celebrate its 10th anniversary, and funded by the Korea Creative Content Agency, the exhibit features a total of 170 works ranging from paintings, illustrations and graffiti, to installations and a collaboration with Zippo lighters, each embodying the defiant nature of street art.

“This exhibition was put together by artists who are shaping street culture in Korea,” said Rego, the director of the exhibition, who described the event “as an opportunity for people to get close to street culture and break the stereotypes.”

The members of Vatos Society came together in 2014, and have frequently worked with each other both officially and unofficially. The collective has around 30 members now, including world-famed doodler Mr. Doodle, pop artist Im Ji-bin and Ha Hyun-woo, the lead singer of the rock band Guckkasten. Members Jay Flow and Royyal Dog stick to graffiti, which many say is at the core of street art. When he’s not working on independent graffiti projects, Jay Flow is also the art director of Stigma.

“Honestly, graffiti is just as much of a part of subculture in Korea as it is in other countries, and there are people who don’t like it in other countries too,” said Jay Flow. “But in Korea, it’s more like people just don’t know what it is. We’re not welcome, and it’s hard. I keep doing it to make an appeal to Korean society, as if we’re having a go at people.”

Jay Flow started spray painting on walls in 2001, when graffiti was not well known in Korea, while Royyal Dog rose to stardom in the United States in 2016 and is known for adding a unique Korean touch to his works. The two close friends collaborated on the main piece of this exhibition, a mural of singer Billie Eilish and Jay Flow’s signature shark humans.

The two artists sat down with the Korea JoongAng Daily on Tuesday and discussed their art, the perception of graffiti in Korea and more. The following are edited excerpts. 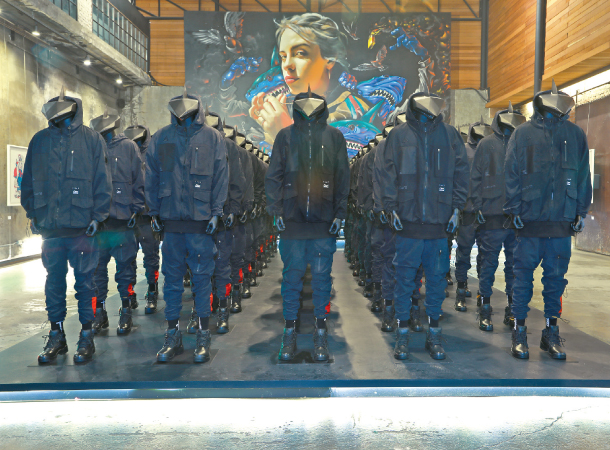 Street art group Vatos Society is holding its exhibition “Vatos Society” at a gallery and cafe called Baesan Korea in Seongsu-dong, eastern Seoul, above. At left, artists Jay Flow (right) and Royyal Dog (left) pose in front a mural they created for the exhibition. [VATOS SOCIETY]

Q. How was Vatos Society formed? What was the idea in the beginning?

A. Jay Flow: We worked together for years before we formed Vatos Society. For instance, if someone said they were working on a music video, I’d go and help paint the set, and they would help me later with something I’m doing. So we said, why not make a crew? We held our first exhibition four years ago, but this is the biggest one so far. We’re not a fixed group, but an organic community that helps each other out. This exhibition is like an archive of what we’ve been doing.

Tell us about your work. What is it like being a graffiti artist in Korea?

Jay Flow: I’ve been doing this for 16 to 17 years now, and honestly, I always think about what I’m doing. Work-wise, I don’t really have a set style compared to other artists. I’m quite a hybrid. I paint, I design, make illustrations and so on. I’d say I developed the skills to fit in better with other people, though.

But being an art director at Stigma has definitely changed me. It didn’t change my style, but it did teach me how to work with others. As an artist, I collaborated with others, but I mostly did my own thing. But with Stigma, it’s about us. It’s about us working together and listening to each other. I’ve let go of my stubbornness and became flexible. I do think my style has become less rigid in a way.

Royyal Dog: When I was in the United States doing graffiti, people were genuinely surprised at the fact that I was Korean. It intrigued them to see that we were doing something across the globe that they started around 30 years ago in the streets. So I thought about what I could bring to the scene, and thought about what “Koreanness” I could express. That’s when the idea of hanbok (traditional Korean dress) crossed my mind. And people really liked seeing Korean patterns and our alphabet.

Why do you think many Korean people are turned off by graffiti?

What we do is far from illegal. There are people who do it illegally, though. I’m not saying I support them, but I do think that’s part of the effort we’re all making. I respect their affinity for disobedience and rebellion. We’re out in the front, but they’re making their own efforts.

Isn’t it difficult to persuade the general public of the work you’re doing?

Jay Flow: I actually understand them in a way. For instance, a shop owner would be understandably upset if someone came and painted over their shop that they had worked hard to decorate. But graffiti culture lies in self-expression. It began from artists grafting themselves onto the streets, like Keith Haring. Everyone has their opinions. We don’t need to explain it to them, because we all think differently.

Royyal Dog: I think graffiti loses its catch when we try to explain ourselves. It’s about the energy when we approach a big wall, paint it and get out of there as quickly as possible. It’s about being rebellious and not making comprises. It’s about saying, “Get lost! This is mine!” We’re not looking for ways to persuade people, we look for people who will like it.