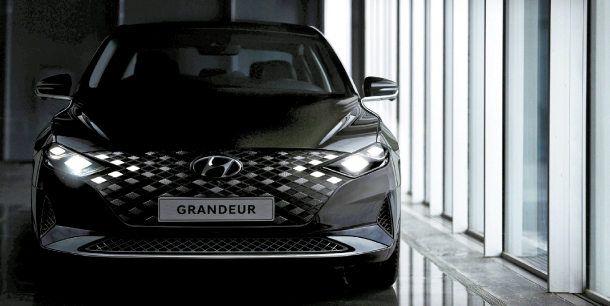 Hyundai Motor offered a glimpse of its upgraded Grandeur premium sedan on Thursday, ahead of the official release next month.

The face-lifted model, coming three years after the sixth generation was released in 2016, is aesthetically changed following Hyundai Motor’s new design philosophy “Sensuous Sportiness,” which was introduced for the first time when the Korean automaker showed the concept car “Le Fil Rouge” during the Geneva Motor Show in March last year.

The design philosophy was first applied to the new Sonata earlier this year.

“The Grandeur is going to be reborn as the new Grandeur with innovative advancement,” a Hyundai Motor spokesperson said in a statement. “The new Grandeur is a strong player in the overall sedan market and will lead the growth and trend of the market moving forward.”

The Grandeur series have been one of the most popular cars from Hyundai Motors to date despite growing public interest in larger-sized SUV models. The largest automaker by sales in Korea said it sold around 340,000 units of the sixth generation model between its release in November 2016 and the end of last month.

The new Grandeur is 4.99 meters in length (16.4 feet), 60 millimeters longer than its predecessor, with headlamps and a radiator grille integrated and combined into one exterior design.

The back maintains the basic looks of its predecessor but has thinner and longer rear lamps than the previous release. The new Grandeur’s 40 millimeters longer wheelbase gives the car a sportier look and larger interior.

The sedan comes with a 12.3-inch cluster and 12.3-inch display infotainment system seamlessly integrated into one bold design.