Practical training behind the success of KoreaTech

Practical training behind the success of KoreaTech 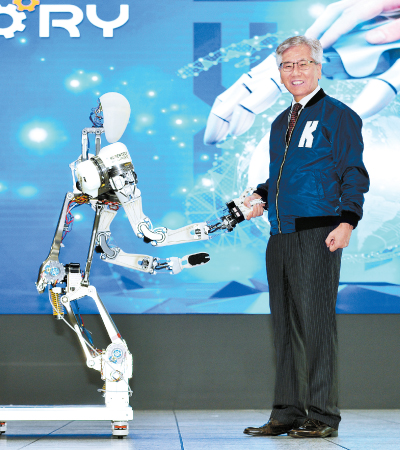 Yi Sung-gi, 62, president of Korea University of Technology and Education, shakes hands with the Ambidex robot arm developed by Naver Labs and KoreaTech, which ranked first in the Fan Robotic Challenge sector of the 2018 International Conference on Intelligent Robots and Systems held in Madrid. [KIM SUNG-TAE]

A university located in the city of Cheonan, South Chungcheong, is leading the way for Korea’s engineering education. It is also where Korean independence activist Yu Gwan-sun (1902-20) started the March 1 Independence Movement, the peaceful demonstration of 1919 that eventually led to the establishment of a provisional government in Shanghai.

The Korea University of Technology and Education, also known as KoreaTech, is a school dedicated to fostering highly competitive human resources through practical-training oriented engineering education. Established in 1991, this year is the 28th anniversary of KoreaTech. Since its establishment, it has become a leading university in employment rate.

Yi Sung-gi, 62, president of KoreaTech, who also served as vice minister of the Ministry of Employment and Labor, pointed out that teaching is the key to success.

“We turn those top 15 percent of freshmen into the top five percent when they go out into society. We are aiming to foster students to become practical engineers. Isn’t providing better teaching the most important responsibility for universities?” Yi said. “KoreaTech will be an innovational model for other universities in the fourth industrial revolution and in an era when low birth rate is a serious issue.”

Yi also provides “1,000 won [$0.85] breakfasts,” for students. Yi said, “The dormitory [where students are provided with meals] closes at 2 a.m. and opens at 4 a.m. Students need to eat well to feel well. We provide students three meals on weekends as well.” He continued, “I’m sure KoreaTech is the only university which has this kind of dormitory.”

The university also ranked first in the job placement rate announced by the Ministry of Education in 2018.

The university’s employment rate this year was 80.2 percent, which is 17.6 percent higher than the average of other four-year universities in the nation.

The students’ jobs are definitely superior in quality, too. Of all students who succeed in getting employment, 59.4 percent of them were hired in major companies or public institutions, 36.7 percent in medium-sized companies and 1.2 percent in foreign companies.

Yi showed the JoongAng Sunday the newly opened “Smart Learning Factory,” the first of its kind in the country to run on the 5G network. It also has spaces for virtual reality (VR), augmented reality (AR) and research development. Ambidex, a robot arm that interacts naturally with humans, was also in the factory. The robot arm, which was developed by Naver Labs and KoreaTech, ranked at the top in the Fan Robotic Challenge sector of the 2018 International Conference on Intelligent Robots and Systems held in Madrid.

“The Ambidex moves with great delicacy just like humans,” Yi said. “The utilization of the Ambidex could be limitless, including cooking, cleaning and serving.”

KoreaTech also helps students gain a competitive edge when making decisions on their future careers. A program called Industry Professional Practice is receiving attention from people struggling to find employment. The Ministry of Employment and Labor expanded this program to about 40 universities nationwide.

“On the day that KoreaTech will mark its 30th anniversary [which is in two years], we will come up with a new plan that can push the boundaries of specialized universities,” said Yi.

Q. You had worked as a public official for a long time. How do you feel now, a few months after taking the position as university president?

A. The university system works horizontally while bureaucracy keeps strict order. I guess that’s why universities generally show slower progress. However, I think [the slowness] is an advantage and a source of autonomy as well.

As one of the top universities that trains many practical engineers, what makes KoreaTech’s special?

We are the one and only specialized university that fosters highly competitive human resources through practical-training oriented engineering education. We have about 4,400 students including around 900 freshmen.

Our special features include a balanced curriculum with theory studies and practical training in a fifty-fifty ratio, 24-hour laboratories, professors with at least three years of hands-on experience, 10 to 25 more credits needed for graduation compared to other universities and actual tuition fees at an average of 1 million won ($847) a year.

Is it really true that KoreaTech’s tuition fees only cost about 1 million won a year?

As a university established by the Ministry of Employment and Labor, does KoreaTech receive much support from the government?

Of about 130 billion won of the total annual budget [for the university], tuition fees account for around 30 percent. We receive [financial] support from the government because we run diverse affiliated organizations including the Online Lifelong Education Center, the Human Resources Development Institute, the Korean Skills Quality Authority and the Employment and Labor Training Institute as well as specialization education. In the “Homo-Hundred” era, [a phrase to describe future humans who live for 100 years], the importance of lifelong education has been growing and eventually will be a major breakthrough for local universities.

You are famous for being a president who tries to get students to focus on studying. What do you think about this?

The days where people are being recognized by their universities’ names are gone now. Their skills and abilities say it all. KoreaTech’s required credits for graduation are 150 for the School of Engineering and 140 for the School of Industrial Management. Also, the university has longer course hours, which is about four hours instead of three hours for a three-credit course. The students cannot graduate the school unless they open an exhibition of their graduation work. Furthermore, the students are required to minor in a department of human resources development. KoreaTech students cannot be distracted from studying.

Can you talk more about the Smart Learning Factory?

Curriculums are divided into two parts, Flexible Manufacturing System and Information and Communication Technology. It allows a comprehensive linking between big data, artificial intelligence, cloud, VR and AR. In the first half of this year, nearly 1,000 people, including from Samsung Display, benchmarked us.

Can you explain more about the factory’s 5G network base?

The existing 4G network has limits due to its slow data transfer rate. However, the 5G network has more than 10 times the transfer rate of 4G. We built 22 base stations in the campus and created a high-tech convergence educational space for students. It is opened to companies and vocational training instructors as well.

Is it true that the Smart Learning Factory changed the university’s curriculums?

Curriculums have already been changed on a large scale. In particular, we newly opened or revised 72 courses in order to allow each major to be educated on the element technology for the fourth industrial revolution. We developed five special tracks, which is the core in convergence education, and provide the students with two different tracks, “Smart Factory” and “VR/AR.” There are about seven to eight courses in the special track and students can earn 13 to 15 credits if they take five courses and the required big-data related course. The students can receive a minor-level degree on this when they graduate.

Industry Professional Practice is the talk of the town among many universities. Can you explain more about this?

It is an industry-university cooperation-based educational model where students can develop their skills and qualifications through practical training at corporations in their junior and senior years for six months and four months respectively. It can be a solution for problematic situations in which the companies need to provide training to already hired employees and students who suffer from making their one-page resume stand out from thousands of others. About 16 percent of all juniors and seniors, or around 360 students, participate in this program annually. Their employment rate is 6.7 percent higher than that of other students who have not participated. They are also paid 1.69 million won a month. Through this program, the students are able to not only build their skills but also earn money.