Samsung heir in court for review

Samsung heir in court for review 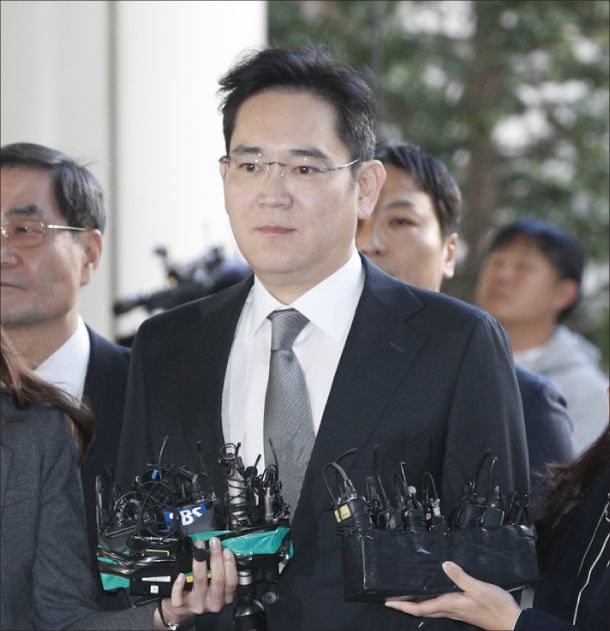 Samsung heir Lee Jae-yong appears for a hearing at the Seoul High Court on Friday. [YONHAP]

Samsung heir Lee Jae-yong appeared again before a court Friday for a Supreme Court-ordered reconsideration of his bribery case that led to the ouster of former President Park Geun-hye in 2017.

Lee, vice chairman of Samsung Electronics, the world’s largest smartphone and chip maker, said he “feels very sorry for causing concern to many people” before entering the Seoul High Court to attend the first hearing. The grim-faced Lee arrived at the court compound in a black suit at 9:29 a.m.

Lee was asked by reporters about the prospect of the final court ruling on the case and management activities but gave no answer.

At the time of Lee’s court appearance, some citizens chanted slogans, such as “Samsung has to repent,” while others cheered for him.

In August, the Supreme Court ordered the Seoul High Court to review its suspended jail sentence for Lee after increasing the amount of money and gifts that can be considered bribes given to the Park side.

Lee was initially sentenced to five years in jail in 2017 for paying 3.6 billion won ($3.06 million) in bribes to a longtime friend of Park as he sought the government’s help in succeeding his father and securing control of Samsung Group. He was freed a year later after the Seoul High Court reduced the sentence to 2 and a half years, suspended for four years, dismissing most of the bribery charges against him.

The Supreme Court, however, said Lee should also be found guilty of providing an additional 5 billion won worth of bribes to the president’s friend Choi Soon-sil, charges excluded from the previous court ruling.

The top court, citing a “misunderstanding of legal logic,” said three horses, worth 3.4 billion won, that Samsung gifted to Choi should be considered as bribes. The earlier ruling had excluded them from bribery charges given that Samsung didn’t give Choi ownership of the horses.

The top court also defined Samsung’s 1.6 billion-won donation to a sports foundation run by the Choi family as a bribe, calling it a planned move relevant to Lee’s management succession from his hospitalized father Lee Kun-hee.

At that time, the Supreme Court also ordered a review of the lower court’s decision on Park and Choi. They were sentenced by a lower court to 25 years and 20 years in jail, respectively, on corruption charges. The court hearing on Choi’s case is set to begin next Wednesday at the Seoul High Court, while the schedule for Park’s case has yet to be fixed.