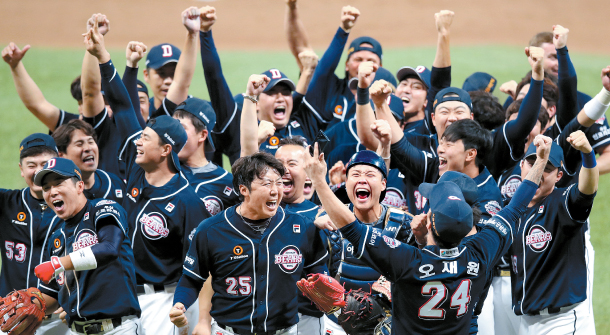 The Doosan Bears celebrate after winning Game 4 of the Korean Series on Saturday at Gocheok Sky Dome in western Seoul to claim the championship title. The Bears swept the Kiwoom Heroes in four games to claim their sixth Korean Series title. [YONHAP]

The Doosan Bears swept the Korean Series, shutting out the Kiwoom Heroes to take the 2019 championship title with a dramatic finale at Gocheok Sky Dome in western Seoul on Saturday.

The fourth game of the series ended with a huge 11-9 score, with the Bears just edging out the Heroes in 10 innings.

The Heroes got off to a strong start, taking an early lead by scoring two runs at the bottom of the first. The Bears immediately responded by picking up three runs at the top of the second to take the lead.

This back and forth set the tone for the rest of the game.

The Heroes came back with a vengeance, picking up six runs at the bottom of the second to take a huge 8-3 lead. After a scoreless third, the Bears started to come back, picking up a run at the top of the fourth to take the score to 8-4.

Then, at the top of the fifth, the improbable happened and the Bears managed to score a huge five runs to take back the lead, 9-8.

The sixth, seventh and eighth passed, and quickly the Bears found themselves needing just three more outs to take the title. But the Heroes weren’t finished.

At the bottom of the ninth, the Bears brought on Lee Yong-chan to end the game. He quickly loaded the bases and, after Heo Kyoung-min fumbled Seo Geon-chang’s hit, the Heroes were able to tie the game and trigger a 10th inning.

At the top of the 10th, the Heroes’ Jake Brigham gave up a double to leadoff batter Oh Jae-won, who made it to third after a bunt from Jung Jin-ho. After striking out Jung Soo-bin, Brigham wasn’t able to get that crucial last out, giving up a double to Oh Jae-il and a single to Kim Jae-hwan to give the Bears an 11-9 lead.

Things could have gone wrong for the Bears at the bottom of the 10th, when some confusion with the umpire forced an unwanted pitching change. Bears manager Kim Tae-hyung visited the mound to check on Lee Yong-chan, but, due to a misunderstanding with the umpire, was forced to pull Lee out of the game and bring in Bae Young-soo.

Despite the misunderstanding, Bae proved more than capable of finishing the job, very quickly striking Park Byung-ho out and grounding Jerry Sands out to lead the Bears to their sixth Korean Series title.

“I think the vibe we got with come-from-behind victories in the regular season continued until now,” said Bears manager Kim Tae-hyung. “Since Kiwoom also had good momentum, I thought this wasn’t going to be easy. But once we won the first two games, I started to think that we had the right attitude. Right now, I feel blank. I’m happy, but I’m blank.”

The Bears defied all expectations this year. Even before the season began, the Bears were expected to struggle due to the loss of starting catcher Yang Eui-ji. Making thing worse, the Bears had to start the season without some starting players due to injuries. Although the Bears didn’t fall far down the table - and catcher Park Sei-hyok ably filled Yang’s shoes - for most of the season they seemed destined to end somewhere around third place.

That seemed to be the case until the very last month of the regular season. The Bears, who in August fell as far as nine games behind leader SK Wyverns, stormed through the table in September, overtaking the Heroes and drawing level with the Wyverns before taking the pennant with a dramatic win over the NC Dinos on the final day of the regular season.

“We’ve lost players, but the remaining players made up for that,” Kim said. “We have to go along with the players we have. We can’t keep on thinking about things that we don’t have. I didn’t care about it much. Our players have a lot of strengths. The remaining players got together well and accomplished this.”

The Bears continued the drama in the Korean Series, winning both the first and second games at Jamsil Baseball Stadium in southern Seoul in the ninth inning.

Once the series moved to Gocheok Sky Dome, the Bears shutout the Heroes in Game 3, winning 5-0, before picking up another thrilling win in the tenth inning on Saturday.

Although it could be a disappointing result for the Heroes, manager Jang Jung-seok said he didn’t have any regrets. Until the Korean Series, the Heroes seemed unstoppable. They defeated the LG Twins in the first round of the playoffs and in the second round, the young club won three straight games against the Wyverns to advance to the Korean Series. Considering their streak, the Heroes’ four straight losses came as a surprise.

“I really have no regrets,” Jang said. “I’ve done everything I’ve wanted to do. I wasn’t [good] enough. I’m sorry to the fans for not being able to give them a good result but I hope they applaud our players because they tried their best. Since we couldn’t get to the top, I have homework to fulfill the areas that we lacked on. I’ll prepare more. I really want to congratulate manager Kim Tae-hyung - I’ve learned a lot.”

The 2019 Korean Series may not have been the result the Heroes were looking for, but the team can certainly be happy with its development under Jang.

This was only Jang’s third year as Heroes manager, and, aside from his first season in 2017, the team has advanced to the postseason for the last two years. In 2017, the Heroes finished sixth, and last year they were knocked out in the second round of the playoff by losing to the Wyverns in Game 5.

In addition to Jang’s ability as a manager, the future seems bright for the Heroes as they are the youngest club in the KBO in terms of player age. The Bears manager also complimented Jang and the young team’s ability after the game.

“Manager Jang Jung-seok was very calm, leading his young players,” Kim said. “That’s left quite an impression on me because it’s not easy. Kiwoom has a lot of young players this year and it looked like I was seeing our team back in 2015. They were very aggressive and seemed to be well structured. They didn’t fall apart easily.”

Now that the KBO’s 2019 season has finally ended, the managers can finally take a break, but many of the players from both the Bears and the Heroes have to head straight back to work. Six Bears and five Heroes will continue their season as they now have to join the Korean national baseball team ahead of the Premier12 next week.