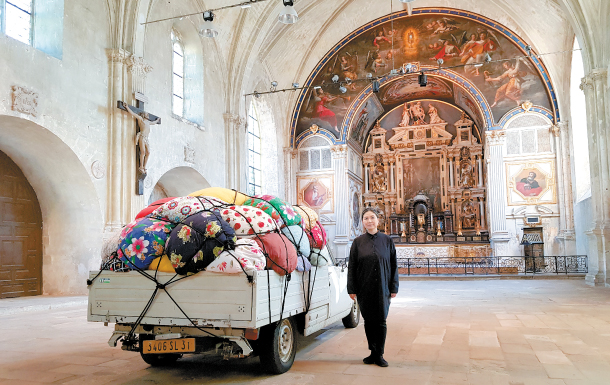 Artist Kimsooja stands with a truck used for her 2007 performance video “Bottari-Truck Migrateurs” inside Saint-Louis Chapel in Poitiers, France. The work is part of the initial edition of the French city’s new art festival “Traversees / Kimsooja.” [MOON SO-YOUNG]

POITIERS, France - In front of many historic places in the western French city of Poitiers - including the Palace of the Dukes of Aquitaine, the former home of the medieval celebrity Eleanor, the queen consort of France and then of England - stand big boards announcing a three-month citywide contemporary art festival that runs through Jan. 19.

Surprisingly, the boards are decorated with obangsaek, or the Korean traditional spectrum of five cardinal colors, which represent the four directions and the center. Moreover, the event’s title is “Traversees / Kimsooja,” including the name of the Korean contemporary artist of international renown.

There is also a shipping container covered with obangsaek in the square of the city’s landmark Poitiers Cathedral. It is Kimsooja’s new work titled “Bottari 1999-2019,” which carries her personal belongings that she amassed in her New York apartment over the last 20 years. Now that she is leaving the apartment, the container is a symbol of her migratory, nomadic and in-between state. Bottari means traditional Korean cloth bundles used to carry belongings.

The inaugural edition of Poitiers’ new art festival “Traversees,” which translates to traverses or acts of crossing, has not taken the typical form of the international art biennials that have saturated the world. Instead, it let one artist interact with and change the city by installing her works in the new contexts of the city’s old buildings and streets.

The artist was also encouraged to invite other artists to join the citywide exhibition. Sixteen artists from all around the world, including big names like Indian artist Subodh Gupta, Japanese artist Tadashi Kawamata and Congolese artist Sammy Baloji, have joined.

“It was the idea of the festival’s co-curator Emma Lavigne,” Kimsooja told the Korea JoongAng Daily at the opening on Oct. 12. Lavigne, the new president of the prestigious Palais de Tokyo museum in Paris, and Emmanuelle de Montgazon, an art historian born in Poitiers, are co-curators of the art event. 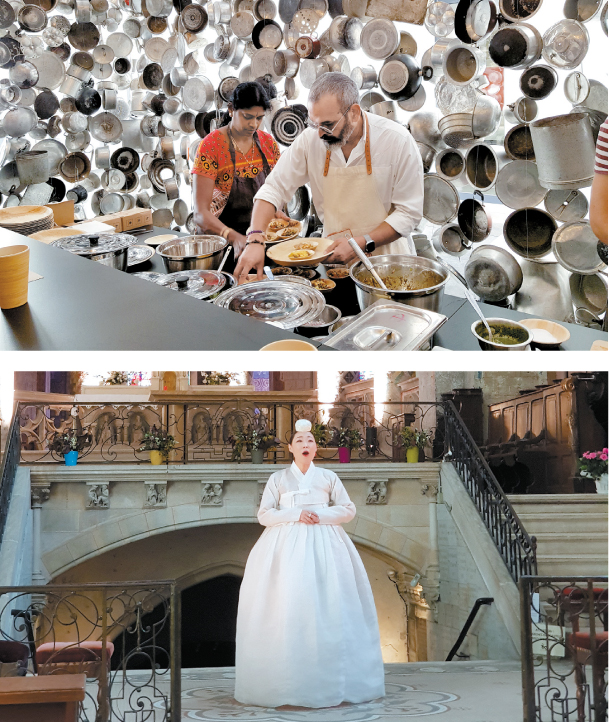 “This might be the most inspiring, challenging and ambitious project I’ve done so far, mainly focusing on site-specificity responding to the notion of Traversees, to which I’ve been devoted for so many years,” Kimsooja said.

Indeed, throughout her oeuvre, the 62-year-old artist has explored borders and crossed borders, sometimes with performances and films that symbolically allude to migration in the real world and sometimes with abstract installations that visualize moving through the borders between cosmic dualities such as yin and yang and material and non-material.

The very work that propelled the artist to international fame in 1997 was also about migration. For the performance and video work “Cities on the Move: 2,727 kilometers Bottari Truck,” she traveled throughout Korea for 11 days on top of a truck loaded with bottari. Its 2007 version, commissioned by a French museum, was set in Paris and is now projected on a wall of Saint-Louis Chapel in Poitiers, with the truck used for the performance parked inside the chapel near its gracefully-arched and painted altar.

According to Lavigne and de Montgazon, the colorful bottari on the truck “reveals the tension between perpetual displacement and a desire for familiarity” and the performance is “an allegory of migration but also an appeal for empathy and peaceful co-existence.” Such elements of the work gain more resonance in the new context of the old Catholic chapel, which could have been either a place of religious exclusivism or a refuge for alienated people.

“To symbolically hand over the keys of Poitiers to an artist is to accept that the city’s memories will be transformed into a space in which to imagine the future,” Lavigne and de Montgazon said in a joint statement.

“Poitiers is a city famous for its rich heritage and its university,” said Alain Claeys, the mayor of the city. “Our wish is to build a relationship between heritage and contemporary art, which will allow heritage to have a new life. In particular, with artist Kimsooja’s works, we can talk about the very important topic of our time - migration.”

Kimsooja has dealt with crossing geopolitical and cultural borders, as well as abstract borders between dualities such as light and darkness, with the motifs of sewing, weaving and bottari. In sewing, a needle and thread penetrate the borders of fabric. And bottari, which is two-dimensional when spread out and three-dimensional when bundled up, makes a very flexible boundary between inside and outside.

Left: A shipping container covered with obangsaek in the square of the city’s landmark Poitiers Cathedral. It is artist Kimsooja’s new piece titled “Bottari 1999-2019.” Right: Kimsooja’s performance installation “Archive of Mind” at the Palace of the Dukes of Aquitaine. [MOON SO-YOUNG]

The artist has used the motifs sometimes in literal forms and sometimes in abstract and symbolic forms. The latter is seen in the “To Breathe” series now installed at the cloister of Chapelle des Augustins and the catacomb of Sainte-Radegonde Church in Poitiers.

Their windows have been wrapped by Kimsooja with translucent diffraction film sheets, so that sunlight coming through them and falling on the walls and floors make planes of iridescent light that constantly change, just like “breathing obangsaek bottari,” the artist said.

“The works lead the viewers to stay for a long time and meditate, while perceiving the changes of the spaces over time,” Lavigne said.

Not only Kimsooja but also some of the artists invited to “Traversees” have transformed the historic spaces of Poitiers into those of new perception and imagination with relatively simple physical interventions.

When Korean artist Jung Marie sang a jeongga, or an elegant song enjoyed by the aristocracy in the Joseon era (1392-1910), a cappella at Sainte-Radegonde Church, her clear voice resounded even better under the church’s high vaults, sending the audience to an ethereal and spiritual space in between the East and the West.

Meanwhile, Gupta’s installation and performance art piece “Cooking the World” attracted many people at the opening of the festival. In a house-shaped installation that consists of used Indian pots and pans hanging from the ceiling, the artist himself cooked popular street foods from several Indian cities and served them to the viewers.

“Inspired by the book ‘Cooking the World’ by Charles Malamoud about how food is essential in Indian ceremonies and rituals, I thought I can do something with food, as I love to cook myself and have created artworks with utensils for more than 20 years,” the Indian artist said.

One of the highlights of the exhibits is Kimsooja’s performance installation “Archive of Mind” at the Palace of the Dukes of Aquitaine. There’s a giant, oval-shaped wooden table. Visitors are encouraged to take lumps of clay in four shades, roll them into spheres and then place them on the table to dry. The table with finished balls of clay resembles the landscape of a desolate alien planet, giving a cosmic feel.

When Kimsooja introduced the work in Seoul in 2016, she said the forms of the spheres would reflect the symmetrical forces of the palms of the participants and their minds. The clay balls would have edges, because of the impossibility to make a perfect sphere and because of gravity’s effect when they are dried on the table.

The dried clay balls make sounds when they are rolled and the sounds represent their geometric forms - the forms caused by the dual forces of the participants’ palms, their minds and gravity.

“Poitiers, which was important in international politics in medieval times but then was dormant for quite a time, is now opening itself up to the world again” Kimsooja told the Korea JoongAng Daily. “Responding to the city’s wish, I have weaved the city with other parts of the world through my works based in the notions of crossing borders and works by other artists from all around the world.”