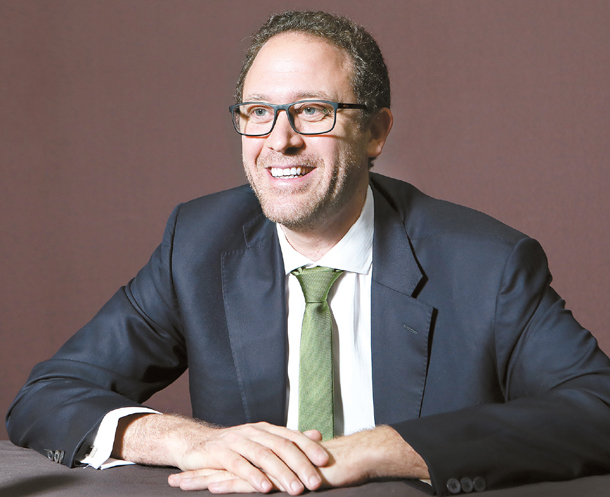 Sebastian Kind, Argentina’s undersecretary of renewable energies and energy efficiency, speaks during an interview at Coex on Oct. 24. [PARK SANG-MOON]

Sebastian Kind, the Argentinian government’s renewable energies and energy efficiency undersecretary since 2016, stressed that renewable energy is not a choice but a necessity and that global investment is crucial.

“Instead of just paying $200-300 per megawatt hour, if you can pay [in the] $50 range in a couple of months, are you going to say no to that?” Kind asked during an interview with the Korea JoongAng Daily on Thursday.

“[Renewable energy] in terms of clean energy production, which is fantastic of course, environmentally speaking, has greater benefits including mobilizing a lot of jobs, mobilizing high tech industries, mobilizing science and technology development and research and development, and it mobilizes industries. So is humanity ready to say no to that? I think it’s too cruel to just rely on what we’re used to, which is the use of fossil fuel.”

Kind is one of the world’s leading professionals in renewable energy, starting his career at BP’s renewable energy department in London, and was elected as the International Renewable Energy Agency’s council chairman in 2018.

He was one of 3,000 government officials, industry officials and energy academics that gathered in Seoul to attend the International Renewable Energy Conference held for three days at Coex, southern Seoul, last week.

The Argentinian energy undersecretary is behind the master plan to transition the South American country from fossil fuel dependent to the world’s leader in renewable energy by raising the share of renewable energy to 20 percent of all of the country’s power supply by 2025 through the renewable energy auction program RenovAr, which includes long-term power purchase agreements (PPAs).

“There are two ways for contracting renewables. One is RenovAr and another is corporate PPA,” Kind said. “So together [between 2016 and 2019] we have roughly 6.5 gigawatts awarded in projects. Five gigawatts are already either in operation or under construction,” he said.

A roughly $7.5 billion investment is committed to the government awarded renewable energy projects. “But still there’s 1.4 gigawatts in the pipeline,” he added.

Thanks to RenovAr, Argentina ranked ninth on the latest Ernst & Young’s Renewable Energy Country Attractiveness Index. Korea ranked 24th, slightly up from 31st place thanks to the Moon Jae-in government’s 3020 plan, which aims to raise the renewable energy share to 20 percent by 2030.

“Last Sunday, Argentina’s [renewable energy] peaked at 14 percent in instant energy demand and 10 percent in average,” Kind said. “So it’s a huge trend and the steepness of the slope, going up in the cooperation of new capacity is high.”

Kind said renewable energy in the last five to 10 years has a huge increase in available technology, particularly for solar energy.

“And that’s thanks to the drop in prices,” Kind said. “Solar [in particularly] has seen prices drop 90 percent in the last six to seven years which is provoking massive deployment worldwide.

“Renewable energy is the most unsubsidized, most convenient [energy] source, in most of the economies.”

Kind said he is currently working on expanding the RenovAr program into a global platform, which he dubs the Global Renewable Energy Mass Adoption Program, or Green Map.

He said the program is particularly targeted toward emerging economies that do not have access to the international finances that are crucial in drawing up long-term renewable energy plans.

“We can divide the world into countries that have access to the international capital market and those that do not have access for whatever reason - political, stability or fiscal instability or whatever - risk is associated [with] those economies,” Kind said. “Renewable is a capital intensive industry.”

“When we jump to [the] rest of the world, which is half of the world like my country or many countries in Southeast Asia or countries in Latin America and Africa, we always face the bottleneck of financing - capital is not keen to flow into these markets thanks to, or due to, risks associated with their economies,” Kind said.

“So to shield the program in emerging markets [from] the market risk and put it in the capital market is key to promoting renewables. Green Map is a platform that is [aiming to] replicate the benefits of what we have done in Argentina but globally to other emerging economies.”

In fact, Argentina was able to get $730 million in partial project guarantees from the World Bank through its RenovAr.

Kind said the backstop of the World Bank not only provided benefits as a financial instrument but also more importantly the recognition and the seal of approval from a multinational institution.

“The World Bank is telling the world that this is something the international capital market should [pay] attention to,” Kind said.

He said the energy industry is a multibillion dollar industry, and that there are huge opportunities for Korea as well.

No Korean company has directly participated in Argentina’s renewable energy projects as of yet, including financial institutions.

“There are some [Korean] part suppliers,” Kind said. “We know that it’s a faraway market and of course that’s a natural barrier for companies and investment,” he added. “But the world is quite global already so we should go global to understand how to [create] opportunities.”

“I’m here in Seoul to speak with authorities and to foster that confidence in the community here,” he said.