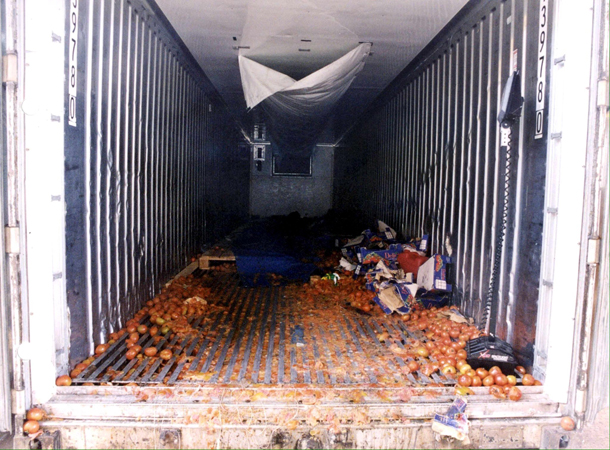 A refrigerated trailer discovered in an industrial park in Essex in southeastern England, where 39 bodies were found on Oct. 23. They likely died of freezing or suffocation while being carried into England in a trafficking attempt. [EPA/YONHAP]

In 1954, the cargo ship SS Warrior left Brooklyn, New York to Bremerhaven in Germany, carrying over 5,000 tons of cargo, including food, household goods and cars. It had 194,582 items. The problem was loading and unloading the goods. According to the operation record, it took ten days to unload (from “50 Things That Made the Modern Economy,” podcast by Tim Harford).

The bottleneck at unloading added considerable transportation cost and time. The invention of the shipping container — a 12-meter (39.4-foot) long, 2.4-meter wide and 2.6-meter high corrugated steep box — solved the problem. Malcom McLean invented the modern container system in 1956, transforming worldwide trade. Because of the standardized containers that can be easily separated from trucks and can be stacked up, transportation time was remarkably shortened and costs were reduced.

The “container revolution” allowed for the expansion of global trade. As producers and consumers are more closely connected beyond borders, consumers can buy various goods at cheaper prices. After the container system was established, globalization of exchanging goods, services and manpower across borders accelerated.

However, globalization did not lower the barrier for everyone. With the anti-globalization trend spreading, anti-immigration policies in Europe were reinforced, and arranging illegal entry became a big industry. Citing Europol data, The Times of London reported that smuggling refugees and immigrants in Europe is estimated to be a 4.6 billion pounds ($5.9 billion)-a-year business, and 40,000 people, including truck drivers, are involved in the business.

A tragic incident took place. On Oct. 23, 39 bodies were found in a refrigerated trailer at an industrial park in Essex in southeastern England. It is presumed that they had frozen to death or suffocated while being carried into England in a trafficking attempt.

The sad tragedy is that the container they had boarded for a better future became a moving coffin for some.