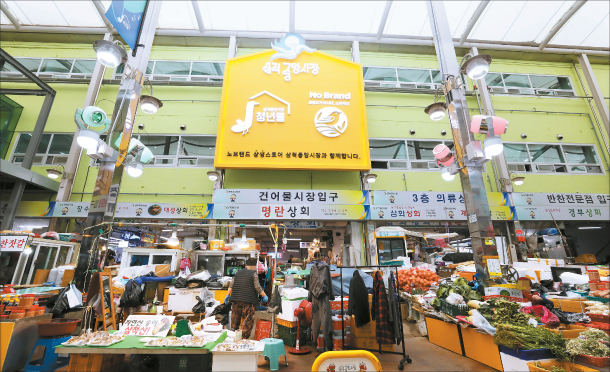 Emart launched a No Brand store inside a traditional market in Samcheok, Gangwon, on Thursday. [EMART]

SAMCHEOK, Gangwon - Giant retailer Emart opened a No Brand store inside a traditional market in Samcheok, Gangwon on Thursday.

Emart said it wants to attract younger visitors to the market, which is most popular with people over the age of 50. Samcheok is a region known for coal plants.

This is Emart’s 10th foray into traditional markets. The first was in Dangjin, South Chungcheong, in 2016, followed by Gumi in North Gyeongsang and Ansung in Gyeonggi. Emart says its overarching goal is to coexist with traditional markets, which have long argued that discount chains are an existential threat to them.

The No Brand chain offers affordable prices through partnerships with small- and medium-sized companies not known to the buying public, according to Emart. The price of a 32-inch LED television at a No Brand shop, for instance, costs 199,000 won ($1,700).

The space for the No Brand store in Samcheok is over 312 square meters (3,358 square feet). Emart said it created a space that is similar to its shopping complex Starfield, but much smaller.

The second floor space had been empty for two decades.

“In order not to disrupt sales of the existing merchants, we have made sure not to sell any products that overlap like vegetables, cigarettes, soju or beer,” said Park Si-u, a social cooperation task force team manager at Emart, at a press event at the market on Thursday.

“We also hope moms can relax while shopping in the space we offer.”

“I learned about the opening of the No Brand store online,” said the mother of an infant who visited the market on Thursday. “The entrance of the store, as well as other facilities that have opened, definitely made the atmosphere of the market brighter.”

Along with the No Brand store, Emart offered a kids’ library, where children can read books, and an open lounge where books for adults are offered, at the market.

Some locals, however, suggested the No Brand store could attract attention briefly but not change the fate of the traditional market.

“We don’t see many familiar brands at No Brand,” said 35-year-old Hwang Hye-seo, who was shopping at the store on Thursday. “There’s a Homeplus store nearby. It takes around 15 minutes by foot. Although people may visit the No Brand store out of curiosity, I think they, especially seniors, will go back to shopping at Homeplus where they can find familiar brands.”