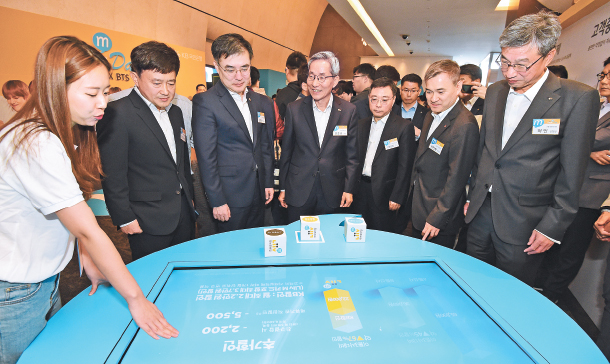 KB Kookmin Bank will become the first Korean lender to enter the telecommunications market next month with the launch of its Liiv M phone plans.

The bank announced Monday that it will release three cheap phone plans next month, renting network space from LG U+, the third largest mobile carrier in Korea.

The move is part of KB’s experiment to see if telecom services can translate into increased revenue in its financial business.

“Instead of raking in huge profits from the new offering, the move aims to boost the appeal of financial products, said Hur Yin, CEO of KB Kookmin Bank.

In line with the strategy, a user can get a higher rate of discount from the phone plan when they fulfill certain requirements such as designating KB Bank as the account their salary is paid to or regularly transferring monthly apartment maintenance fees from a KB bank account. The use of KB Kookmin Card cards could also lower phone bills.

Hur said that the bank aims to have one million subscribers in the mid-to-long term.

“We have a number in our minds that will determine whether the service meets consumers’ expectations,” Hur said. “Broadly, the number should be one million to make sure that the service delivers what customers are looking for.”