Lee is the longest prime minister

Lee is the longest prime minister 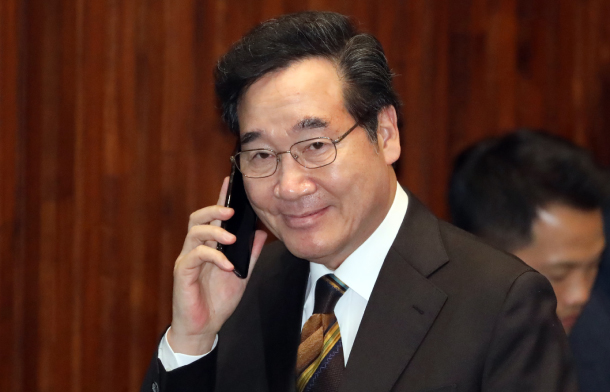 Prime Minister Lee Nak-yon answers a call before a committee at the National Assembly in Yeouido, western Seoul, on Monday. [NEWS1]

As of Monday, Lee, who took office on May 21, 2017, served 881 days in the post. Kim Hwang-sik served as prime minister for Presidents Lee Myung-bak and Park Geun-hye for 880 days.

“I am humbled to have set this record,” Lee said as he entered the government complex building in central Seoul in the morning. “Today is no different from yesterday, and I have no special comment.”

For the past two years and five months, Lee’s performance has received positive evaluations from the public. In various opinions polls, he is often ranked as the most popular presidential candidate with 20-percent levels of popularity.

Lee, who was a journalist at the Dong-A Ilbo, started his political career in 2000. He won four consecutive terms as a lawmaker representing Damyang, Hampyeong, Yeonggwang and Jangseong counties in South Jeolla. He won the local election to serve as South Jeolla governor in 2014 and joined the Moon Jae-in administration in May 2017 as prime minister.

Ahead of the April general election, demands are growing inside the ruling Democratic Party (DP) that Lee return to the party to play a key role. “Lawmakers representing the capital region are increasingly asking me when he will return to the party,” said Rep. Lee Kai-ho of the DP told the JoongAng Ilbo on Monday.

Rep. Lee is a close associate of Prime Minister Lee. The lawmaker succeeded the prime minister in his South Jeolla constituency by winning the 2014 election. “The prime minister has a strong belief that he must make a contribution to the DP’s victory and the success of the Moon administration,” Rep. Lee said. “He must resign by as late as January and return to the party.”

Asked Monday if he will consult with the party and the Blue House to decide his next course of action, Lee said, “My fate is not for me to decide alone. A balanced decision will be made.”

Lee met with DP Chairman Lee Hae-chan at the National Assembly later in the day and discussed his trip to Japan last week to attend the enthronement ceremony of the emperor and meet with Japanese Prime Minister Shinzo Abe. Asked if he and the DP chairman discussed a plan for him to return to the party and assume a leadership post, Lee waved his hand in dismissal. “I tell him to step down as soon as possible,” said Chyung Dai-chul, former DP chairman. When Chyung headed the DP in 2003, Lee served as his chief of staff. “If you want to be a leader, you have to live a life to promote your ideas,” Chung said, urging Lee to head the general election campaign and solidify his basis inside the party to pave his way to a presidential race.

A DP official close to Lee also said the prime minister will resign in the coming months. “It will be after the National Assembly session ends on Dec. 10 and before the Jan 16, 2020 deadline for public servants to resign to run for the general election,” he said.

Many said the timing of Lee’s resignation is dependent on finding a successor. Moon said Friday that he does not plan on a cabinet reshuffle anytime soon other than filling the vacancy of the justice minister created by Cho Kuk’s resignation. Because a confirmation hearing and the National Assembly’s approval are required to name a prime minister, finding the right candidate will be a key to Lee’s departure.

Insiders from the DP expect that Lee, if he returns before the April general election, will likely chair the campaign. DP officials said Chairman Lee would focus on managing primaries and nominations, while Prime Minister Lee would go out on the stump.

Political observers predict that Lee’s goal after April’s general election will be the 2022 presidential election, but they said Lee’s lack of his own faction inside the DP and the uncertainty of Moon loyalists’ support are his weakness. They, however, said Lee has a strong chance if the DP successfully wins the general election with a campaign he led.

“If the prime minister returns to the party by the end of this year, the reformists can unite around him,” said a first-term DP lawmaker.

“I’ve heard dozens of lawmakers who said they will unite with Lee at the center if he returns to the party,” a Lee associate also said.