Seoul’s newlyweds getting help with the rent

Seoul’s newlyweds getting help with the rent 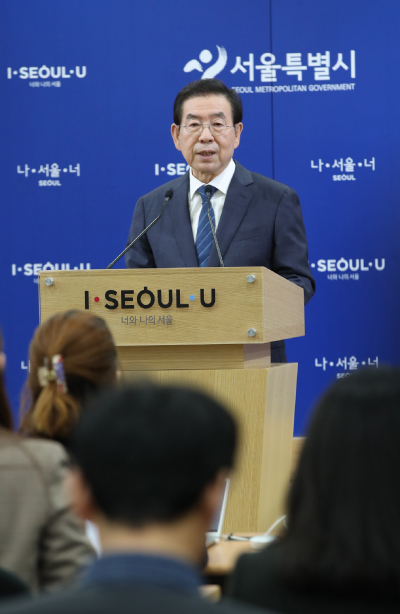 Seoul Mayor Park Won-soon on Monday announces the city government’s plans to support housing for nearly 25,000 newlywed couples in the capital every year, starting in 2020, through a multi-trillion won welfare initiative. [YONHAP]

The Seoul Metropolitan Government announced plans Monday to support housing for nearly 25,000 newlywed couples in the capital every year - half the city’s newlyweds - starting in 2020 through a multi-trillion won welfare initiative.

The new program will cost some 3.1 trillion won ($2.6 billion) worth of tax money from 2020 to 2022, the office said in a press release. Given that about 50,000 couples in Seoul get married every year, Seoul said it expects nearly one out of two couples in the capital to benefit.

The initiative relaxes the criteria for financial support and increases the number of public houses leased to newlyweds at low prices.

About 17,000 newlywed couples in Seoul are eligible under the current plan, which means the revisions that are expected to take effect next year will see a 47 percent increase in the number of beneficiaries.

For financial support, couples who don’t own a house, who have been married for seven years of less and whose annual combined income is 100 million won or under will be entitled to take out a loan of up to 200 million won at a low interest rate to pay off their monthly rent or jeonse.

Currently, only couples with a yearly combined income of 80 million won or less and those who have been married for five years or under are allowed to benefit from the program.

The loan term has also been extended from eight years to a decade, and couples with more children will be given preferential interest rates.

Seoul Mayor Park Won-soon said during a press conference in Seoul Monday that he expects the couples to borrow a total of 2 trillion won from local banks through the financial support program, which means Seoul will have to allocate 36 billion won every year to help pay off the couples’ interest.

In order to allow common-law married couples to be included in the financial support plan, Park said he would discuss the issue with local banks and look for ways to amend the city’s relevant regulations.

On suspicions that some people may pretend to be in a common-law marriage to receive benefits, Park, a former human rights lawyer, said he trusts young adults to behave with integrity because not doing would be “a criminal offense.”

A website from the Seoul Metropolitan Government explaining the changes and guiding newlywed couples to their most ideal choice, tentatively called the “Seoul housing portal,” will launch in late November, the Seoul office said.