Jang Ha-na, the most recent LPGA winner from Korea, has made the biggest jump in the latest world rankings. 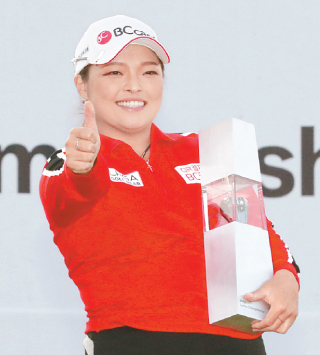 Jang Ha-na poses with a trophy after winning the BMW Ladies Championship in Busan on Sunday. [YONHAP]

Jang won the inaugural BMW Ladies Championship in the Korean city of Busan last Sunday, defeating Danielle Kang of the United States on the third playoff hole. It was Jang’s fifth career LPGA victory and her first since February 2017.

Jang reached a career-high No. 5 in the world that year while she was playing on the LPGA Tour. But she rescinded her LPGA membership in May 2017 to return to Korea and spend more time with her family. She has been playing on the KLPGA Tour since.

Throughout three seasons on the LPGA Tour, Jang picked up four wins - three in 2016 and another in 2017.

With the victory last weekend, Jang is eligible to accept an LPGA Tour card. She can rejoin the tour immediately for the three remaining tournaments this year, or she can take membership at the beginning of the 2020 season. If she wants to take the latter route, she must notify the LPGA by 5 p.m. Eastern Time on Nov. 18.

After playing two rounds at the BMW Ladies Championship, Jang told reporters she won’t return to the LPGA even if she won a title in Busan because she wanted to stay home with her ailing, aging parents. But after the victory Sunday, Jang hedged a bit and said, “It’s something I have to discuss with my family. My mother isn’t quite well. I’ll take my time before making this decision.”

Elsewhere in the rankings, Kang, who’d won in Shanghai the week before losing to Jang, rose four spots to reach a career-high No. 7.

Lexi Thompson of the United States is the highest ranked American in the world ranking at fifth, while Canada’s Brook Henderson in ranked sixth.

The world rankings award points based on the strength of the field and evaluate players’ performances over a rolling two-year period. An extra emphasis is placed on results from the 13 most recent weeks.

The LPGA Tour will continue its season in Asia, this time at the Taiwan Swinging Skirts LPGA presented by CTBC in New Taipei City, Taiwan, from Thursday to Nov. 3.