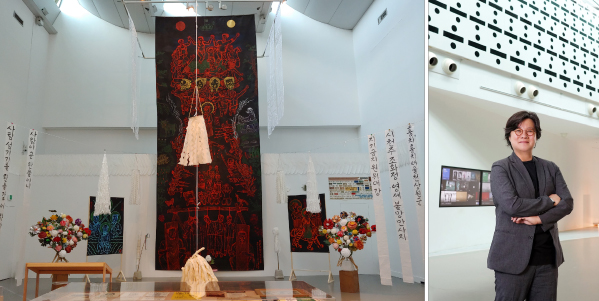 Gyeonggi Museum of Modern Art’s new director Ahn Mi-hee, right, met with local press for the first time on Tuesday, prior to the opening of the museum’s latest exhibition “Locus and Focus: Into the 1980s through Art Group Archives” that kicked off on Tuesday afternoon. [YOON SO-YEON, GYEONGGI MOMA]

The Gyeonggi Museum of Modern Art (Gyeonggi MoMA) aims to offer more opportunities for the residents of Gyeonggi to enjoy art and culture with additional museum branches across the province, newly-inaugurated director Ahn Mi-hee said on Tuesday.

Ahn met with the local press for the first time as the museum’s new director to celebrate her 100th day in office, as well as present seven new missions for the museum to work toward through in the coming years. Ahn previously served as the chief curator at the KF Gallery, run by the Korea Foundation.

“The Gyeonggi Museum of Modern Art is a provincial museum, which means that it inherently carries the mission to develop Gyeonggi’s art culture and communicate with the local community,” Ahn said. “Looking back at the past 100 days at the museum, Gyeonggi MoMA has within itself a great potential that has not yet been fully realized because of both internal and external factors […] It is our mission to include and present the modern art of Gyeonggi and form a network in doing so.”

While Ahn presented seven main tasks that will be undertaken by the museum, the essence lied in “overcoming the museum’s geographical limits,” referring to its distance from central Seoul.

“We will build our first sub-branch in Gyeonggi under a museum network project titled ‘I-Eum,’” Ahn said. I-Eum is taken from the Korean word ieum, which means to connect, and will start with building various branches across the province, to later forming an art network across the region between smaller art galleries and culture spaces. The first is likely to be Pangyo, where “the economic level of life is high but not so much the cultural level,” according to Ahn.

Part of the network project will include a partnership with the Gyeonggi Creation Center and building a storage museum - like the Museum of Modern and Contemporary Art Cheongju - which will ultimately help in forming an art infrastructure within Gyeonggi and hopefully attract more visitors from other regions.

Gyeonggi MoMA’s efforts will also expand to securing more works in the future, and establishing a proper archive based in the Gyeonggi region. Their latest exhibition “Locus and Focus: Into the 1980s through Art Group Archives” that kicked off on Tuesday is the first of that effort, gathering artworks and documents created by artists from the Gyeonggi region. Some 330 pieces - mainly paintings and prints - and 1,000 related documents are on display, shedding light on small art groups active from the 1970s to the 1980s, during the military dictatorship.

“We believe that looking at art is to look at the history of that era,” said Gim Jong-gil, the chief curator of Gyeonggi MoMA. “I believe it is the duty as the later generation that we look, record and study what our ancestors have done. It wasn’t just about leaving a footprint in history, but revealing all these things to the audience so that people will come back and study all this. It is about rewriting and redefining our art’s history.”

The exhibition runs until Feb. 2. Admissions are free.