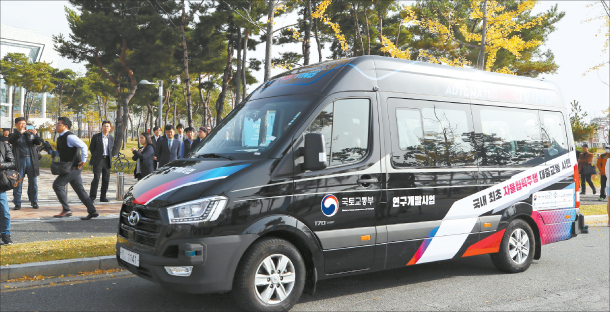 The Ministry of Land, Infrastructure and Transport hosts a Level 3 autonomous vehicle demonstration in Sejong on Tuesday as the city plans to start regularly testing the vehicles as early as next month. [YONHAP]

SEJONG - Black vans plastered with colorful decals roamed the roads of the country’s administrative capital on Tuesday, passing by government offices at a leisurely pace.

While the vehicles could be mistaken for the minivans regularly seen on Korean roads - perhaps dropping off kids after taekwondo lessons - they were partially autonomous vehicles, steering, braking and accelerating all on their own.

The demonstration by the Ministry of Land, Infrastructure and Transport on Tuesday kicks off Sejong City’s plans to start testing self-driving vehicles on its roads as early as next month with hopes of placing the city as a leader in the global race for autonomous mobility.

Although the vehicles didn’t have to experience any hectic traffic conditions, considering the empty roads of the relatively new city, the Level 3 autonomous vans drove a 3.2-kilometer (1.99-mile) course from the Sejong Convention Center. The vans traveled at speeds of up to 50 kilometers per hour (31 miles per hour) at one point, while switching to manual driving mode two times on roads where accidents are frequent.

Level 3 self-driving vehicles have conditional automation, meaning they are able to drive on their own but need a driver at the wheel.

The city plans to test two medium-sized buses, jointly developed by the Korea Transport Institute, SK Telecom, Seoul National University and Hyundai Motor, two or three times every week on a 9.8-kilometer course next month. It hopes to expand tests to a 35.6-kilometer course by 2021, running 20 times a week.

The city is currently designated as a regulation-free zone for self-driving vehicles as part of the government’s plans to expedite technological development in new industries. It is able to test self-driving vehicles without having to worry about regulations within a 15.23 square kilometer (5.9 square mile) area until August 2023.

Through the regulatory exemptions, the city plans to also create an autonomous driving shuttle service to transport tourists around its downtown park.

The Transport Ministry also held the Smart Mobility Conference Sejong 2019 on Tuesday along with the self-driving vehicle demonstration, hosting lectures by next-generation mobility experts such as Kurt Hoppe, director of product management at Google’s Android Automotive.