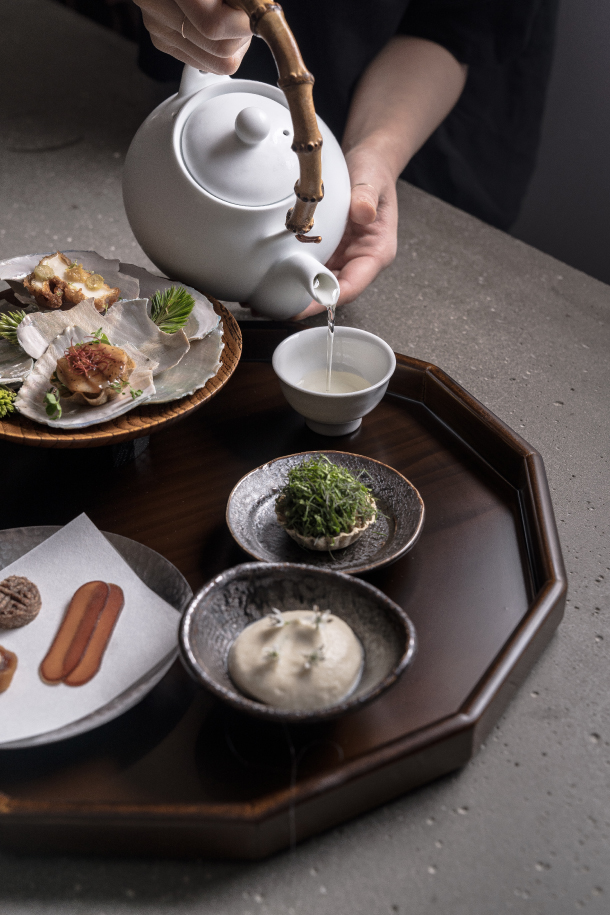 A collection of small bites presented during a six-hands dining event held by chef Lee Jun of Soigne, chef Kwon Woo-joong of Kwon Sook Soo and chef Junghyun Park of Atomix in September at Atomix in New York. [DIANE KANG]

Koreans no longer feel the need to ask people outside of the country if they are familiar with local essentials like kimchi, thanks to the work of Korean chefs around the world who have paced their way into the mainstream in many of the world’s food capitals.

Instead of kimchi or bulgogi, international diners abroad are increasingly interested in chimaek (chicken and beer), makgeolli (Korean rice wine) or anything that Koreans casually enjoy as a daily meal or after-work drinks.

While a handful of Korean-inspired restaurants in New York have received one star, Atomix stands out for having earned a star in its first year in business, and now two stars in its second year. The more casual Atoboy, which Park opened along with his wife Ellia Park in 2016, has also contributed to the hype for the finer Atomix.

“Working during a time when there’s a need for food from a particular country is the reason [my] restaurants have become popular,” said chef Park, who often goes as JP Park, during a visit to Seoul earlier this month for a dinner event.

“Just like there are different music genres that are appealing in particular time periods, presenting something that’s comfortable for New Yorkers to approach is the key. The timing was right for us.”

While working to make dishes that are attractive to New York diners, Park has not stayed in his kitchen waiting for people to try his food. He has been actively traveling to promote the restaurant and share what he does across the world by appearing in many different pop-up and collaborative events, including one at Lyle’s in London a few months back.

Other Korean chefs attracting international acclaim have been doing the same. In working to promote their businesses, they have become ambassadors of Korean food.

They are often asked to share what’s hot in Korea’s food scene at the moment, helping introduce dishes to people who have little to no experience with Korean cuisine learn about the charms of Korean food.

That’s a significant change from about a decade ago, when the government was promoting Korean food through a variety of governmental programs.

Instead of presenting only “good” images of food through commercials, advertisements or one-day food festivals, the chefs out in the field have taken the baton and spread the word about what they eat every day.

The exchanges of ideas in the kitchen inspire many to mix and match various combinations of ingredients to make something exciting, yet appealing to the tastes of diners overseas.

“We come up with ideas that can be competitive in the market,” said chef Se-hong Kim of modern Korean restaurant Oiji, who is thinking about opening one more restaurant in New York with his chef partner Tae-kyung Ku.

“‘Let’s make Korean food popular and well-known’ has never been the agenda chefs are pushing for, but the promotion of Korean food comes naturally as we try to make something different from dishes by other chefs from different cultural backgrounds in a city like New York, where all kinds of dining options exist.”

Food inspired by both Korean and American culture served at Atoboy, left, and Oiji, right, in New York.

The power of collaboration

With attention falling on the Korean food and chefs more than ever in the past few years, many young chefs making a name for themselves overseas have begun to work with chefs based in Seoul more often.

The leaders of these collaborations have been Atomix from New York and Le Passe Temps in Lyon, France. Chef Junghyun Park of Atomix and its sister restaurant Atoboy has invited a number of chefs to take over the kitchen in New York for a few days to show New Yorkers the different styles of food each Korean chef presents.

These events also give restaurants in Seoul a chance to spread their name to locals in New York who may visit Korea’s capital city in the future. Chef Lee Choong-hu of Zero Complex, chef Hyun Sang-wook of Dotz, alongside chef Lee Jun of Soigne, chef Kwon Woo-joong and many others have been to New York to cook.

Chef Lee Young-hoon of French restaurant Le Passe Temps has been working closely with chef Kwon Woo-joong of Kwon Sook Soo to better introduce Korean food in the city of Lyon. Lee, who is more focused on adding Korean touches to French techniques - like anchovy broth while serving foie gras alongside gim (laver) powder - wanted to see how his approach to French cooking could be diversified through a collaboration with chef Kwon from Korea.

This year, Gaon in Seoul has also started to develop its international presence. Unlike other restaurants in Korea collaborating with Korean chefs working overseas, Gaon works with non-Korean restaurants like Per Se in New York to promote its restaurant in Seoul alongside a more modernized version of classic Korean cuisine.

Sharing with the staff

While these big name restaurant chefs work to make the food at their restaurants better known, other chefs are taking a more bottom-up approach to familiarizing Korean food to people working in kitchens around the world.

A number of chefs on working holiday programs at restaurants overseas not only try to learn while they are there, but they also become authorities on Korean food for their international colleagues who go back to their home countries and cook food inspired by their time overseas.

The spices, ingredients or even cooking techniques they learn from other young Korean chefs may even appear on a tabletop in towns far away from Korea.

Chef Roy Moon, who used to work at Noma in Denmark for a few months, made a staff meal filled with Korean delights while he was there to naturally spread the word about a variety of Korean dishes.

“The staff always asked why there are so many different types of broth used for different dishes,” said chef Oh Jun-tak, who just came back to Korea after working in Hong Kong for a couple of years.

Thanks to these types of exchanges, even a classic French restaurant in Paris uses kimchi as garnish to its grilled fish, while others use gochujang (hot pepper paste) to season other ingredients. Even when what they make isn’t a Korean dish, the use of some Korean products as a garnish or condiment eventually brings attention to what’s originally from Korea. 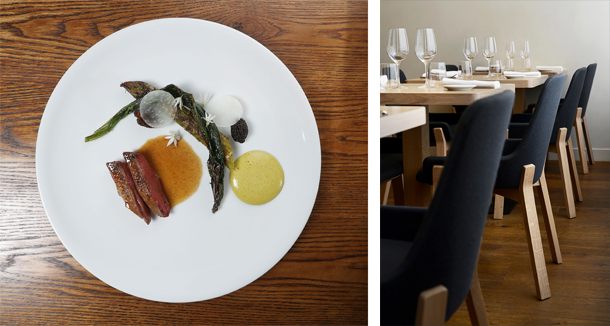 Just as many Western-style dishes are paired with drinks from the same region as the ingredients on the plate, some Korean sommeliers see opportunity in the growing interest in Korean cuisine. Sommelier Kim Kyung-moon, the first sommelier from Korea to receive the “master sommelier” title from the Court of Master Sommeliers, is confident that he can establish a sales network of Korean drinks in New York, where he has studied and worked in for a decade.

He has chosen seven liquor houses from Korea to distribute their products in New York from his previous visits.

For now, he will focus on distributing distilled drinks to bars and restaurants, which can be used as a base alcohol for mixed drinks. Kim has worked in many different well-known restaurants in New York including The Modern inside the Museum of Modern Art, and plans to use his network to find out where Korean drinks may sell well.

“Drinking cocktails is part of a very ordinary daily routine in the United States, so I think consumers find [Korean liquors] easy to approach when first introduced in cocktails,” said Kim.

“I want these drinks not only discoverable at Korean restaurants but also other restaurants in New York. I believe it has competitiveness because there aren’t that many distilled rice drinks available in the U.S.”

The attention on Korean food definitely comes from the many ambitious chefs around the world, but many say the power of BTS is undeniable in creating more interest in Korean food.

Recently, when Singaporean pastry chef Janice Wong visited Korea, she said that she would like it if the members of BTS tried her desserts and praised it on social media, during a media conference at Paradise City, Incheon.

“Korean food was able to grow more because more people are now more interested in getting to know Korean culture in general,” said Park of Atomix, adding that the growing K-pop scene has helped people become more curious about what stars eat and where they go in Korea.

“When people see Korean culture as something they want to follow and learn, it gets easier for us to present any kind of Korean food, even things that people may think is too difficult for non-Koreans to enjoy, and they have a much easier time finding new things more interesting and good.”