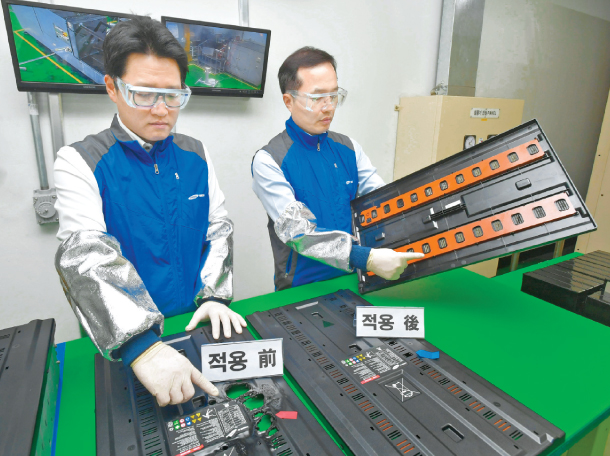 ULSAN - Samsung SDI’s Ulsan facility started out as a TV factory in the 1970s. Today, the 2.2-square-kilometer (0.85-square-mile) site is where the company rolls out electric vehicle (EV) batteries and energy storage systems (ESS).

An ESS stores power from solar panels or wind turbines for consumption later. It generally uses a large number of batteries connected together.

The demonstration introduced two fire prevention systems currently in the process of being added to more than 1,000 ESSs nationwide that employ the company’s battery modules. The initiative follows 26 fires at local ESSs since 2017.

“Please be aware that in reality in no way can a scenario like this happen in the field - this is a demonstration strictly planned to show the efficacy of our new installations,” said Heo Eun-gi, senior vice president of Samsung SDI’s system development team.

One of the systems was an apparatus with capsules of fire extinguishing material. The setup will be attached to the ceiling of each module, the capsules popping automatically if the temperature were to rise above a certain temperature, which the company said was confidential as it’s related to technology. The other solution is a silver, rectangular piece of material, slightly larger than a single battery cell, that can endure temperatures up to 800 degrees Celsius (1,472 degrees Fahrenheit). They are inserted between battery cells to prevent fire from spreading from one cell to the next.

It took 10 minutes for the system to cool.

The module without the barriers spewed black smoke and generated sparks not long after the nail was driven in. Cell temperatures went above 320 degrees Celsius.

What’s notable was the temperature of cells adjacent to the one penetrated by the nail. Those with the barriers did not get much hotter than 50 degrees Celsius, which is within the “normal temperature range” for ESS batteries, according to a Samsung spokesperson.

The temperature of modules without the upgrade hit 150 degrees Celsius. At this point, the module exploded and caught fire.

“Battery modules that are newly produced since this month have the fire prevention systems. There are around 1,000 ESSs in the country that use our batteries at the moment - it’ll take around seven to eight months to upgrade all of them,” said Samsung SDI CEO Jun Young-hyun.

The upgrades will cost around 200 billion won. Samsung SDI will pay for the retrofit with the hope of recovering the public’s trust and boosting demand for ESS products, which has fallen off since the fires.

Other prevention measures Samsung announced earlier include software that improves the monitoring features, a shock-sensing sticker that changes color in case the battery module was exposed to external shock and regular training sessions for ESS managers.

Among the 26 ESSs that caught fire in 2017, Samsung SDI supplied batteries for nine of them. The company believes failures were caused by external factors not the batteries themselves.

“Our goal was to develop [and expand in] the local industry, and based on that performance, we were able to achieve that before the fires,” said Jun. “Through recent measures, I will make sure our batteries can be 100 percent safe even in natural disasters.”

Samsung and LG Chem were two Korean leaders in the global ESS market, with a combined market share of 70 percent. Boosted by a government initiative for green energy, projections for the local ESS industry were bright, but after the fires, the local ESS market has stopped growing.

SNE Research, a market research firm that specializes in batteries, said that the lithium-ion battery market for ESS applications would increase 38 percent on year, led by European, U.S. and Japanese markets. Korea’s market, on the other hand, was forecast to retreat as ESS projects were halted after the fires.