Harvard professor hopes to spread power of sijo: David McCann’s love of Korean poetry led to a career in academia

Harvard professor hopes to spread power of sijo: David McCann’s love of Korean poetry led to a career in academia 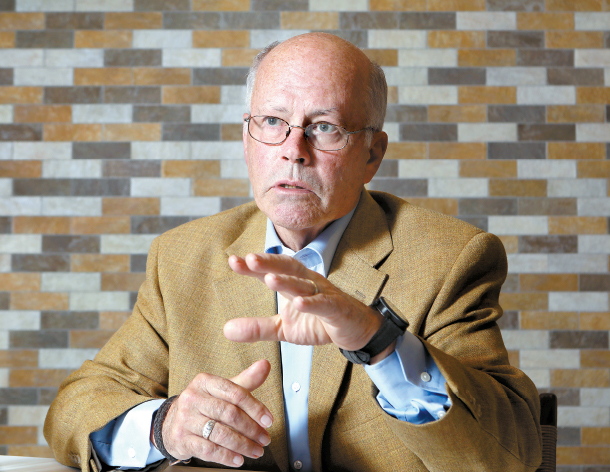 Former Harvard Professor David McCann, above, discusses sijo and Korean literature during an interview on Oct. 18. Below is the first sijo that McCann ever wrote. [PARK SANG-MOON]

While it’s still taught in schools, sijo, the traditional three-line poetic form often compared to the Japanese haiku, is hardly a part of everyday life in Korea.

There’s one American, however, who’s been sharing his passion for sijo with the world for the last few decades.

Meet David McCann, the 75-year-old former Harvard professor of Korean literature who has done a lot with sijo - teach it, write it and perform it on a ukulele, among others.

“The younger people in Korea may not be writing or reading sijo, but I think sijo’s performance side may be a way for people to get interested,” McCann said. The poetic form, which emerged in the Goryeo period (918-1392), has been traditionally performed in a singing style with instruments. “The person I think of is Psy of ‘Gangnam Style.’ He could do a sijo and people would be very interested.”

McCann’s interest in Korean literature began over fifty years ago. He developed a passion for Korean poetry when he first came to Korea in 1966 to teach English at a high school in Andong, North Gyeongsang, as part of the U.S. government-led Peace Corps. Upon returning to the United States, McCann went on to teach at Cornell University and later at Harvard, where he became the school’s first professor of Korean Literature supported by the Korea Foundation, Korea’s public diplomacy organization, and taught courses about writing Asian poetry.

The Korea JoongAng Daily got a chance to meet with McCann on Oct. 18 and discuss his efforts to raise awareness of sijo and insights into the Korea literary scene. McCann was recently invited to visit Seoul and Andong as part of an appreciation program organized by the Korea Foundation for former Peace Corps volunteers. The following are edited excerpts from the interview. 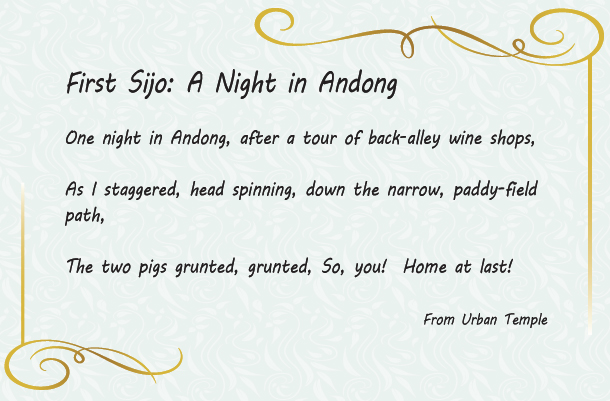 Q. You first came to Korea in 1966. How does it feel to come to Korea now and see how the country has changed?

A. The change in the last 50 years is breathtaking. In the 1960s, South Korea was one of the poorest countries in the world. Its per capita income was lower than North Korea’s.

The old Andong is gone. Before, the only paved street in the whole town was just in front of the railroad station. Everything else was just a dirt road. In Seoul’s City Hall plaza there were ox carts going through - it was just a completely different setting. The urbanization of Korea has been extraordinary.

How did you first get into Korean poetry?

One day at a bookstore in Andong, I noticed a small book with a red cover. In the 1960s there were no books with red covers, because red was communist. So I was very curious and took it out the shelf, and it was a collection of poems by Kim Sowol. I opened up the book and there were English translations and the original Korean, and I thought I could improve my Korean language with it.

What I discovered, to my surprise, was the original language poems just drew me in, and before I knew it, I had memorized several of them.

How did you get into sijo?

Kim Sowol is known as a folk song poet and I realized that there are other sung forms of traditional poetry, so I thought I would work on those. I read Chong Pyong-uk’s “Dictionary of Sijo Literature” when I was in Harvard before I came back on a Fulbright grant in 1973.

I was studying sijo primarily as a literary form when I was working on my Ph.D. dissertation. It wasn’t until when I was in Korea that I began to find out how much enjoyment and appreciation there was for sijo as a sung form and its performance dimension.

What efforts have you made to popularize sijo?

I published my own book of sijo in English and that was translated into Korean. I’ve been writing poetry in sijo and I’ve taught it to students in my class on writing Asian poetry. I’ve been working with the Sejong Cultural Society in Chicago, which has an annual sijo contest.

About 10 years ago, when Kathleen Stephens was the U.S. Ambassador to Korea, she came to Harvard for a presentation and I was at a luncheon with her and I got talking about the sijo. I said, “If you think it might work, it might be fun to have a sijo workshop in Korea through the U.S. Embassy.” She came up with the idea of having a sijo contest and she hosted it at the ambassador’s residence. There were about 30 students and they sat down on the floor in the traditional style, just like the Confucian state examination. I served as one of the judges.

Given that haiku and sijo are quite similar in form, what can students get out of learning sijo specifically?

I think sijo is a very different kind of poetry. In haiku, you cannot let yourself go into the poem, you keep yourself back. In sijo, the self can be right there. The voice can be the poet’s voice.

Also when you look at sijo, the first line introduces the subject, the second develops it and the third line you have the turn and the resolution of the poem. That is exactly the form of the freshman writing essay at Harvard University. It’s in 4 parts: introduction, development, turn - consider another direction - and conclude. The sijo can be studied as a very effective form for presentation of a view.

Do you tend to follow tradition when you’re writing your own sijo?

I do. But there’s also a number of sijo I’ve written where they break loose and arrange themselves differently on the page.

When we go up to our family cottage in Maine in August and September, directly in front of it is the ocean. I sit on the front steps and write poetry. It was interesting on Wednesday going down to Andong on the bus and looking at the landscape. All of a sudden I started writing poetry. The landscape does that. I like to experiment with the form but I do have the three lines and the twist in my mind.

Switching gears, why do you think a Korean author hasn’t yet been awarded the Nobel prize in literature?

It’s a difficult thing to understand. Maybe 15 years ago I would get letters from the Nobel committee asking me to send a letter to inform them of poets or novelists that I may suggest for them to consider. They were quite actively reaching out to me, but also to [other] international literature [experts] to see who’s out there.

I don’t know why, but I think they sort of closed on in their thinking of literature now. I think they’re much more focused on European writers. But Korean writers have gotten international prizes in England and elsewhere. And I think the international recognition and enthusiastic interest is growing. I don’t think poetry has quite the same, strong connection, but that’s changing. There’s been a really fine collection of poetry published in the last few years.

You’ve translated poetry by Ko Un, who was recently involved in a sexual harassment scandal. What was your reaction when you found out about the accusations against him?

That was a huge shock. I had translated a book of poems by Ko called “Traveler Maps,” and my former student Wayne de Fremery put the translations and the originals into a fold-up, like an actual map 20 years ago. Very soon after it came out, there was a reading in Washington, D.C., where Ko Un and I shared the stage and he would read the poem in the original and I would read the translation.

Are you worried that people spend more time on their smartphones than reading books?

Somebody in Andong actually mentioned that you can’t get into a poem on a flat screen. It’s not the same as a page, and that does concern me. I think it’ll be an increasingly difficult challenge to get people to appreciate the sijo if it only appears on the screen, but that applies to poetry in general.

However, on the screen people do find other ways to express ideas. When you look at emojis, for example, those little symbols are like Chinese hanja [characters]. A week ago my daughter sent me a “Have a good trip” message and it had four little images of a house, taxi, airplane and a happy face. It was like a line from a Chinese poem.

How have you been enjoying your retirement, and what’s the plan now?

Sleeping (laughs). I’ve got really simple wishes. I want to spend more time with family and friends. My wife and I love to travel together - we’ve been recently in Europe and Hawaii.