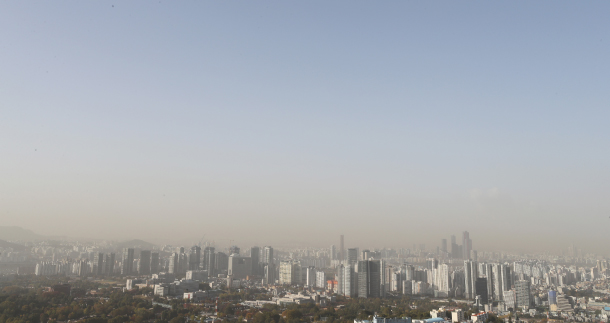 The sky over Seoul, seen from Mount Namsan, is thick with fine dust particles on Tuesday. A fine dust advisory was issued in Seoul, Gyeonggi and many other parts of the country Tuesday as weather forecasters warned about a steady influx of yellow dust from abroad. As fine dust particles can cause various ailments and undermine the body’s immune system, municipal officials asked people with respiratory or cardiovascular problems, children and other vulnerable people to refrain from going outdoors. [YONHAP]

“With the southeastern movement of yellow dust across the peninsula, we expect high levels of PM10 throughout the country for the day,” Air Korea, an air quality monitoring agency run by the Ministry of Environment, announced Tuesday.

Korea is hit with yellow dust from the Gobi Desert every winter and spring, which combines with emissions from factories in the northeastern coastal areas of China and local sources such as coal power plants and vehicle emissions. The problem gets worse every year.

PM10, or dust particles with diameters less than 10 micrometers, are carcinogenic as they can travel through the respiratory tract into the bloodstream and cause strokes, heart disease or lung cancer, according to the World Health Organization (WHO).

Yellow dust is known to carry more PM10 than PM2.5 particles, which have diameters less than 2.5 micrometers - and pose a greater risk to human health.

This is particularly so at the time when yellow dust is coming into Korea, according to the Seoul Metropolitan Government’s Climate and Environment Headquarters.

The PM10 level hit 228 micrograms in Yangcheon District, western Seoul, at 4 a.m. Tuesday. The level settled down to 143 micrograms by 2 p.m.

The hourly average of PM2.5, however, remained below the WHO recommended level of 25 micrograms in nearly a dozen cities throughout the country in the afternoon.

Some southern cities, however, exhibited high PM2.5 levels in the afternoon, such as Busan, which recorded an hourly average of 45 micrograms, and Ulsan, with 55 micrograms.

With spiking PM10 levels in the morning, the city government of Seoul issued a fine dust warning and asked residents to wear masks.

It recommended people with respiratory conditions to stay at home if possible.

“We expect the air quality to improve by tomorrow, as atmospheric movements remain active,” Air Korea said on its website on Tuesday afternoon.