Remember when Psy’s “Gangnam Style” went viral all around the globe in 2012? People who didn’t even know what or where Gangnam is, sang along and proudly danced the horse trotting moves. Perhaps it was the first time for many people to actually hear a K-pop song. A few years later, boy band BTS is breaking records, topping charts and staging unprecedented performances all over the world.

From the unexpected success of Psy to the domination of BTS, K-pop groups - commonly referred to as idol groups in Korea - are landing high on foreign music charts, while their music videos get million of views on YouTube, no doubt a sign of their global success. Even rookie groups are no longer afraid to set off on world tours, and some are even debuting their songs for the first time outside of Korea - something that would have been impossible even a decade ago.

K-pop is yet again turning the page to a new chapter. 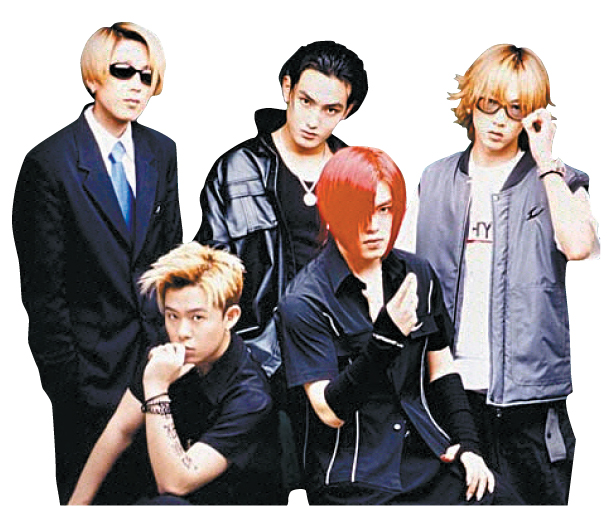 Defining K-pop is a difficult job that still generates heated discussion. But boy band H.O.T., who debuted in 1996, is usually considered the first K-pop idol band by those in the industry, as they were the first group to debut with a thorough management plan created by their agency SM Entertainment. The group’s members were chosen, trained - in dancing, singing, acting and even foreign language - and introduced to the public by the agency, which managed every step of their career.

“It created the structure of K-pop, which was systemized by a management system,” said pop music critic Cha Woo-jin. “But [the groups] were mainly targeted toward the Korean audience and lacked the ability to fit in to the digital market.”

The many groups that followed are classified as the first generation of idols, each of them usually made up of five to seven members. Boy bands Sechskies, g.o.d and girl groups S.E.S, Fin.K.L., Shakra and Baby Vox fall within this category.

Most experts consider boy band H.O.T., top, the first K-pop idol band, who were later followed by other groups such as Shakra, left, and Baby Vox, right. [JOONGANG ILBO]

Some insist that pop trio Seo Taiji and Boys, who debuted four years before H.O.T., were responsible for creating a new era of pop music in Korea and refer to them as the very first idol group of Korea, but pop culture critic Kim Zakka says that Seo Taiji and Boys “doesn’t exactly fall into the category of idols.”

“The core of the K-pop idol industry is that [the acts are] a product of an agency’s meticulous strategy,” he said. “It follows through with a system, from the audition. So for idol groups, the members don’t get to decide what to do with the group, the agency does. Seo Taiji and Boys came up with their own plans and music.”

The meticulous planning helped create BoA, who made her debut at the start of the new millennium. She was the first singer from SM Entertainment that was targeted to Japan, to partial success.

Managed with a stronger hand, and launched with the ambitious goal of becoming “Hallyu (Korea Wave) idols,” the second generation of K-pop groups looked beyond the peninsula, according to the Korean Foundation for International Cultural Exchange (Kofice). The category comprises a generation of groups starting with boy band TVXQ to groups who debuted from the 2000s to early 2010s who are now considered to have paved the way into overseas launching.

According to the foundation, the second generation focused on exporting their music to the Asian market, primarily to Japan and China. Their main tactic was to translate their popular Korean songs into different languages and distribute them in the local market through a local company - a distinct feature of Hallyu content, from television shows to albums.

“But when Sechskies disbanded in 2000, many of first-generation groups either disbanded or came to a virtual halt, putting an end to their era. And except for TVXQ, no other idols really gained much popularity in the idol music scene until 2007.”

In fact, TVXQ is considered the first group to have actually succeeded in penetrating into the Japanese music market. The group was actually poised to enter the Chinese market in their early days, but their charms appealed more to Japanese audiences, and they became the first foreign artists to hold a concert at the Nissan Stadium in Yokohama, Japan. SM Entertainment founded SM Japan in 2001, but their success in Japan was mainly possible due to partnerships with Japanese companies, according to an industry insider.

“It’s obviously much better to have a local company, who has all the know-how of what needs to be done, like distribution and production. Just like industrial manufacturing, you need someone to sell your stuff to the local market,” the insider said. 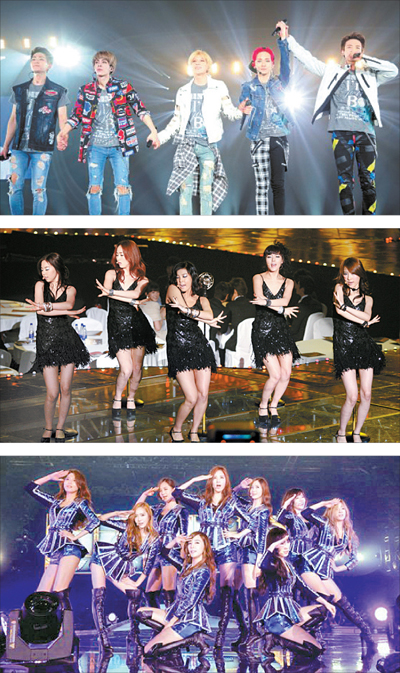 The second generation of K-pop groups, such as (from top) SHINee, Wonder Girls and Girls’ Generation, attempted to reach out to the overseas market. [SM ENTERTAINMENT, JYP ENTERTAINMENT]

Other groups followed in the footsteps of their predecessors, and groups such as SHINee, Wonder Girls and Girls’ Generation all found success in Japan as well.

Another tactic that was picked up quickly by local talent agencies was to include a member of a foreign nationality in the group - as was the case with Han Geng, a former member of boy band Super Junior. Having a Chinese member significantly raised the number of Chinese fans, which made other agencies realize that recruiting a foreign member was key to winning the hearts of Asian fans.

“It sounds similar, but it was actually about expanding out to the Japanese and Chinese markets. Japan has the second-largest music industry in the world, while China was a major developing market back then, with a great deal of potential. It was about targeting the Asian culture as a whole.” 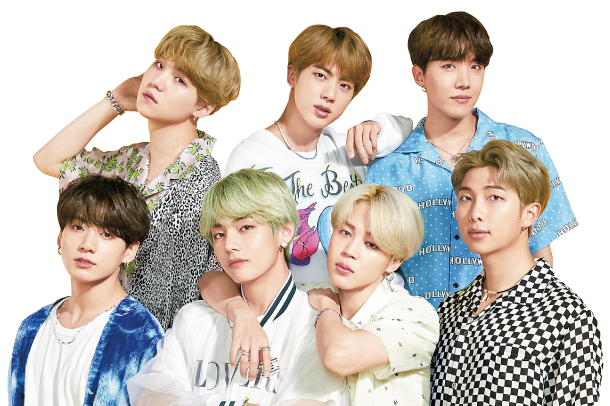 Defining the exact point when the third generation of K-pop starts is something that is continuously debated among music experts.

While some say that it began as early as 2006 with boy band Big Bang, others say that it began with the debut of Exo in 2012, or that it started more recently when BTS started to storm the global music charts. Different people might place different groups at the starting point, but the essence of it lies at the same place: Did they make it outside of Asia, namely, in America?

The biggest names of K-pop over the years, including BoA, Wonder Girls, Girls’ Generation, Kara, Rain and 2NE1 have all tried knocking on the door of the American music market to little or no success. Some groups managed to appear on the Billboard charts but failed to make a mark.

“A major characteristic of the third generation is that they transitioned from targeting a Korean audience to a global one, a trend that continues to this day,” said critic Kim.

In that sense, Psy’s horse-riding dance moves and the fact that “Gangnam Style” peaked at No. 2 on Billboard’s Hot 100 singles chart was a monumental feat for K-pop. It may have taken years for any other group to climb high on the American chart, but it was the first time that Korean music made a mark in the West, and the industry realized that it could be done.

“From 2009, when the iPhone began the era of the smartphone […] K-pop spread to regions such as Southeast Asia, Europe and South America due to the new media infrastructure,” said critic Cha.

“K-pop music videos were typically uploaded onto YouTube and promoted through Twitter, which made it crucial to have access to a foreign fan with high number of followers. K-pop fans all over the world had been fragmented and dispersed beforehand, but they came together with the agency’s official YouTube channels or social media accounts. This was the key for Psy’s ‘Gangnam Style’ and again for BTS in 2017.”

The most crucial factor that divides the second and third generation of K-pop idols is whether they made it in the American and European market, such as Seventeen (left) and Blackpink (right). [YONHAP, YG ENTERTAINMENT]

The popularity of various digital platforms gave singers the ability to reach out to a bigger audience with more ease, even smaller groups with smaller agencies who would have struggled to get a slot on TV shows or radio in the past. Platforms like YouTube, Twitter, Naver, V Live and Instagram helped K-pop groups climb over barriers once considered too high for foreign artists. It’s not about getting on the Billboard charts or touring the world anymore - it’s about how high you can chart and which stadium you can perform in.

This year, BTS performed at London’s Wembley Stadium, rocked New York City’s Citi Field baseball stadium and even colored the streets of Riyadh purple - their signature color - for their concert at King Fahd International Stadium, the first for any foreign artist.

“What we’ve achieved with BTS is that we now know that somehow, K-pop works,” said Mimyo, music critic and chief editor of K-pop magazine Idology. “The North American music market was seen as impenetrable, but we saw it happen. We’ve got them interested, but it’s still hard to say that we’ve persuaded the mainstream market. It’s still centered around K-pop fandoms, and so it’s important that we maintain our uniqueness to approach the global audience.”

Professor Lee of Mason Korea added, “While it’s understandable that K-pop artists go for a trans-national identity, it still remains to be seen whether that will work or not. It’s still important that K-pop maintains the ‘K’ in K-pop, because that’s what sells well to the global audience - unless it wants to battle head-on with mainstream pop music.”