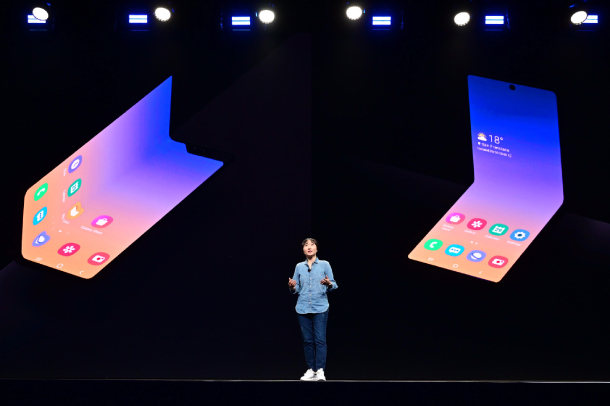 Samsung Electronics’ next foldable phone may be a clamshell that folds vertically, the company teased Tuesday at the Samsung Developer Conference (SDC) 2019 in Silicon Valley.

Rumors that Samsung was working on a clamshell smartphone were circulating even before the launch of the Galaxy Fold, which folds horizontally like a book, in early September.

This was the company’s official confirmation, although it still claims it is “exploring” the form factor, reminiscent of the clamshell flip phones that made Samsung a player in the mobile phone industry.

“Since our announcement at SDC last year, we have been maximizing the potential of the groundbreaking infinity flex display,” said Jeong Hye-soon, Samsung’s head of Framework R&D, during a keynote speech at the event, referring to the kind of screen used in the Fold.

“The amazing thing with foldable technology is that it can also become more compact. This brand new form factor we’re now exploring not only easily fits in your pocket, but it also changes the way you use your phone - even when you take photos and videos.”

A brief video played during the event showed the Fold followed by a bar-shaped smartphone - seemingly longer than the Galaxy S or Note series - folding into a square. Unlike the Fold, the clamshell phone did not seem to have an outer screen.

The company did not disclose any details beyond the demo video. But according to a Bloomberg report last month, the inner display measures 6.7 inches, and the entire device is designed to be thinner than the Galaxy Fold.

It was entirely unclear if this new next-generation foldable phone will be commercialized anytime soon.

Engadget pointed out that Samsung’s “interest in the category” of clamshell foldables does not “guarantee that Samsung will be so enthusiastic that it releases a clamshell worldwide.” Forbes, on the other hand, said the company is “serious” about the idea, citing Galaxy Club, a Dutch blog that specializes in leaks, which claimed to have “just found the batteries Samsung is developing for it.”

Samsung unveiled the Galaxy Fold at the same event in San Jose, California last year, with more specificity. A demo clip flashed the words “Arriving soon.” Samsung’s Senior Vice President Justin Denison even pulled out a prototype from his suit pocket in front of the audience - which turned out to be similar to the actual product released in September.

Motorola is expected to unveil a clamshell smartphone at a Nov. 13 launch event - supposedly reminiscent of its iconic Razr flip phones. Huawei’s folding phone, the Mate X, recently launched in China after months of delays.