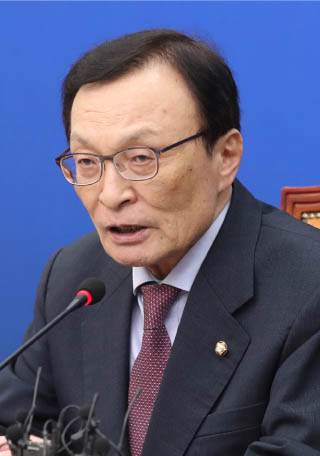 Lee Hae-chan, chairman of the ruling Democratic Party, holds a press conference at his office in the National Assembly on Wednesday. [YONHAP]

The leader of the ruling party issued a public apology on Wednesday over the recent political and social turmoil surrounding former Justice Minister Cho Kuk.

“As the head of the ruling party, I feel heavily responsible,” Chairman Lee Hae-chan of the Democratic Party (DP) said during a media conference at the National Assembly. “I want to issue a sincere apology to the people.”

It is Lee’s first apology about the scandal-ridden Cho’s appointment and subsequent resignation. Cho, nominated by President Moon Jae-in to head the Justice Ministry and a campaign to weaken the prosecution’s powers, was appointed to the post in September despite fierce protests by opposition politicians and the prosecution’s probes into his family’s suspected corruption. He, however, resigned on Oct. 14, after only serving mere 35 days.

“Because we were too preoccupied with the grand cause of the prosecutorial reform, we failed to understand the despair and frustration of the people, youngsters in particular, toward unfairness,” Lee said.

In his apology, Lee did not specifically mention Cho. The apology appeared to be an attempt by the ruling party to stop its young supporters’ departure as they increasingly turned against the Moon administration and the DP following the Cho’s scandals. Youngsters were particularly enraged by the rare opportunities for internships and extracurricular activities that only children of the power elites such as Cho’s daughter have enjoyed for college admissions, deploring that they were against Moon’s presidential pledge to build a “fair society.”

Lee’s apology also seems to be a response to the growing demands from the reformists inside the DP that he must take some responsibility. “It is largely Lee’s fault that the party is acting as if nothing happened,” Rep. Rhee Cheol-hee recently said.

“The latest crisis demonstrated once again the prosecution’s high-handed way of wielding its powers,” Lee said during the media conference. “We can also feel the people’s strong desire to reform the prosecution.”

Lee promised that the DP will exert all efforts to complete the reform measures such as the establishment of a new investigation agency for public servants.

Meanwhile, the prosecution is continuing its investigation into the corruption allegations surrounding the Cho family. The prosecutors asked the Seoul Central District Court for the second time to issue a warrant to detain Cho’s younger brother for further questioning into various criminal charges surrounding the Ungdong School, a middle school operated by the Cho family. The prosecution’s first warrant request was denied earlier this month.

Cho’s younger brother was suspected of having received bribes in exchange for offering jobs to teachers at Ungdong School. The prosecution also suspects that he destroyed evidence and arranged a co-conspirator’s flight to another country. The warrant hearing will take place today at 10:30 a.m. and the outcome is expected to be out late at night or early tomorrow.