Only 16 percent of South Koreans believe North Korea will give up its nuclear weapons while a whopping 76 percent believe the North will never give up its nuclear weapons according to a poll conducted by Gallup Korea that was published on Oct. 11. The public’s sentiment reflects the disappointment felt after the North Korea-U.S. working-level talks in Stockholm held from Oct. 4 to 5 fell apart. Former South Korean Unification Minister Lee Jong-seok said, “At this point, North Korea’s demand is very clear.” In an interview with JoongAng Sunday, Lee shared his opinions on North Korea’s ulterior motives and the prospect of resumption of negotiations. Below are edited excerpts of the interview. 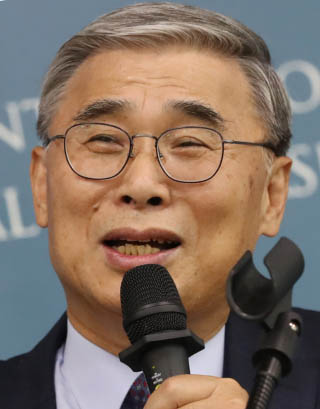 Q. Why did the working-level talks between Pyongyang and Washington in Stockholm fall apart?

A. North Korea’s top nuclear envoy Kim Myong-gil said, “The United States failed to come up with a new calculation method in accordance with North Korea’s demand for a removal of any institutional frameworks undermining North Korea’s security and development.” Concerning the regime’s demand for security guarantees, the veteran diplomat asserted that [the United States] “resumed joint military training with [South Korea], drawing state-of-the-art war machines to the Korean Peninsula.” The remark from the North’s top negotiator was obviously aimed at U.S. President Donald Trump to make good on his promise at the last year’s U.S.-North Korea summit in Singapore of suspending military exercises with South Korea. [Fulfilling the promise] would be the first step of showing good faith to ensure a security guarantee and would serve as the precondition for the resumption of talks. The United States must have failed to provide an answer.

What about the issue of lifting sanctions?

In North Korean leader Kim Jong-un’s speech last April, many experts misinterpreted the phrase, “I won’t be obsessed with issues regarding sanctions anymore,” mistaking that North Korea would put more emphasis on a security guarantee rather than the lifting of sanctions as a corresponding measure for denuclearization. However, the regime is demanding its “right for development and survival” to the United States. This is a subtle way of requesting the lifting of sanctions. Chairman Kim just put it in a different way with his own words.

A report says the United States offered the temporary lifting of restrictions on the export of textiles and coal, North Korea’s key export products, in exchange for the dismantlement of the Yongbyon nuclear facility with something extra.

North Korea must have sought lenient conditions on the United Nations Security Council’s sanctions by accepting a “snapback clause” mentioned in the failed second Trump-Kim Summit in Hanoi, which refers to reimposing nuclear related sanctions on North Korea if it is found to be in noncompliance with denuclearization. The North won’t be satisfied with sanctions being postponed on a few random items. From North Korea’s point of view, a verifiable shift in United States’ strategic thinking can only be confirmed when it pursues “step-by-step simultaneous denuclearization” rather than hostile sanctions and the denuclearization-first approach.

[After the breakdown of talks, there hasn’t been any response from President Trump, which is quite unusual. The United States also wasn’t part of the UN Security Council’s joint statement made by six European countries including Britain, France and Germany on Oct. 8 which denounced North Korea for test-firing a submarine-launched ballistic missile.]

Can the negotiations be resumed? If so, when?

If the leaders of South Korea and the United States express their willingness to halt joint military drills in their friendly letters, the talks can begin within this year. I can’t provide a specific timeline. However, it must be in President Trump’s calculation that preventing North Korea from conducting nuclear tests or launching intercontinental ballistic missiles would be helpful for the election scheduled for next year.

What is South Korea’s role as a mediator?

Distrust from North Korea is higher than ever. The historic deal, which promised the dismantlement of the Yongbyon nuclear facility in exchange for lifting of sanctions, fell apart after it was announced in the Pyongyang Declaration last year in Hanoi. The United States’ joint military exercises with South Korea, though scaled down to division level, went ahead at a low profile. Chairman Kim’s “unconditional resumption” of the Mount Kumgang tour program or the re-opening of the Kaesong Industrial Complex is still up in the air. Last September, President Moon Jae-in suggested transforming the DMZ [demilitarized zone] into an “international peace zone” in his keynote speech at the UN General Assembly, but North Korea expects the South to fulfill previous commitments rather than talking about future visions.