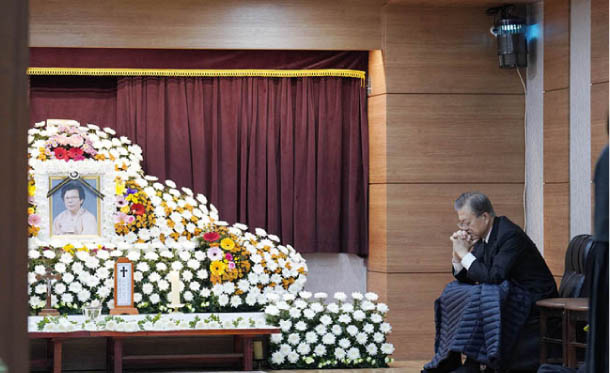 President Moon Jae-in appears deep in thought on Wednesday at the mourning altar set up at the Namcheon Cathedral in Busan for his mother who died on Tuesday at the age of 92. Mourners are expected to pay their respects at the altar until Thursday morning, after which the funeral service will take place for family members only. [NEWS1]

President Moon Jae-in hosted a family ceremony to mourn the death of his mother, receiving only a few guests including political and religious leaders as well as diplomats from major countries on Wednesday.

Moon’s mother Kang Han-ok died Tuesday at the age of 92 at a hospital in Busan, and a mourning altar and Moon’s temporary presidential office were established at the Namcheon Cathedral of the Holy Cross in the southern city.

After spending the previous night at an undisclosed location, Moon returned to the cathedral around 5:40 a.m. on Wednesday and attended a series of prayers and a morning mass.

Announcing Kang’s death on Tuesday evening, the Blue House has said the funeral ceremony will be a private event for the family only, upholding Moon’s mother’s wish.

All entrances of the cathedral were being controlled by the Presidential Security Service as of Tuesday to restrict access for people other than the presidential family and the cathedral’s worshipers.

“The mood is very quiet inside,” said a presidential aide. “Because it is a Catholic ceremony, a series of prayers for the dead is continuing throughout the day.”

Friends of the presidential family were not allowed to visit the mourning altar early on Wednesday. “Only the immediate family members are allowed,” said a friend of the president’s younger sister Moon Jae-sil, whose entry was not permitted. “We understand.”

Politicians and top officials were paying visits one after another, but only a few met with Moon.

Moon also decided later in the evening to receive ambassadors from major countries.

On Tuesday night, Lee Ho-cheol, a close associate of Moon who also boasts a 40-year friendship with the president and who had served as the senior civil affairs secretary during the Roh Moo-hyun Blue House in 2007, paid a visit and met with Moon. Lee, however, said he was not allowed to pay respects at the mourning altar.

Minister of Land, Infrastructure and Transport Kim Hyun-mi and the ruling Democratic Party Rep. Kim Boo-kyum, former interior minister, each paid a visit on Tuesday but they were not allowed to enter the cathedral. Rep. Kim visited again around 7 a.m. Wednesday, but was not able to meet the president.

Busan Mayor Oh Keo-don also arrived at the cathedral Wednesday morning, but his request to visit was turned down.

Later in the morning, the presidential family decided to receive some visitors. Chairman Chung Dong-young of the Party for Democracy and Peace paid a visit around 10 a.m. and waited outside for about 25 minutes. Moon then expressed his wish to meet with Chung, and Chung paid respects to the dead and expressed his condolences to the family for about five minutes starting at 10:40 a.m.

Media started reporting about plans by top politicians including Prime Minister Lee Nak-yon and leaders of the opposition parties, and the president decided to meet the heads of political parties and religious leaders.

From the Blue House, National Security Office Director Chung Eui-yong was to pay a visit as a representative of the presidential staff.

A group of 20 leaders from seven major religious organizations, including Archbishop Hyginus Kim Hee-joong, chairman of the Catholic Bishops’ Conference of Korea, also paid a visit. They expressed their respects without any religious ceremonies, and talked with Moon briefly.

Father Song Gi-in, who is close to not only Moon but also knew the late Kang, arrived in the morning and stayed throughout Wednesday. A democracy activist and founding member of the Catholic Priests’ Association for Justice, Song is known as the spiritual mentor of Moon.

Flowers were sent by the prime minister and cabinet members as well as politicians and religious leaders, but they were all turned down as announced earlier.

Moon also posted a message on his Facebook in the morning and remembered his mother. “My mother has passed away,” he wrote. “It was fortunate for me and my family to be with her during her last moments, as she passed away peacefully.”

Moon noted that his mother was a Korean War refugee from North Korea, and she missed her hometown throughout her life. “Just like all mothers in our world, she had many hardships, but she said, ‘I was happy,’” Moon wrote. “I deeply appreciate the people’s sympathy for my grief.”

The funeral ceremony is scheduled to end today. The late Kang will be buried at the Haneul Cemetery for the Catholic Diocese of Busan in Yangsan, South Gyeongsang.