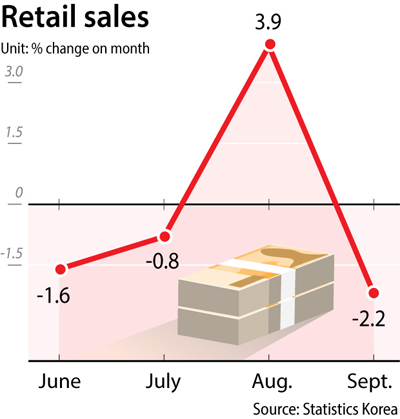 Consumption and industrial output both fell in September after rising in August.

According to Statistics Korea data on Thursday, the retail sales index dropped 2.2 percent from the previous month, while industrial output fell 0.4 percent.

Retail sales serves as a measure of consumption.

The agency explained that retail sales experienced a decline due to a base effect from the Chuseok holiday season in September.

The indicator had risen 3.9 percent in August due to early shopping for the holiday.

Factory and mining output rose by 2.0 percent from the previous month, but service output fell 1.2 percent as the agency blamed poor weather conditions, such as frequent typhoons, weighing on travel and leisure services.

Despite the decline in consumption and industrial output, facilities investment rose by 2.9 percent in September from the previous month, its fourth consecutive monthly rise.

Although investment recorded a year-on-year drop of 1.6 percent due to a base effect from massive investment by semiconductor companies last year, the agency expressed hope that investment could start to pick up.

“As the base effect from past investment in semiconductors and equipment disappears, we are seeing investment continuing to rise on month,” said Kim Bo-kyoung, a director at Statistics Korea during a briefing at the Government Complex in Sejong.

The leading composite index, which predicts the future direction of the economy, rose by 0.4 percent in September compared to the previous month, the highest since April this year.

Kim explained that the index rose largely due to a 13.9 percent rise in construction orders, which includes a 3.1 trillion won ($2.67 billion) project to build a railroad that connects Ansan in Gyeonggi and Yeouido in western Seoul.