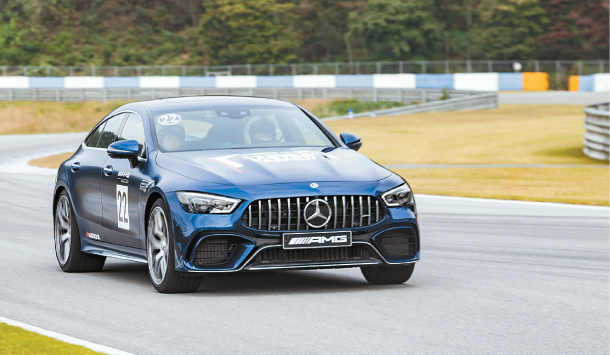 YONGIN, Gyeonggi - The year 2019, no matter how it ends, will be a memorable one for Mercedes-Benz Korea.

The Korean unit of German automaker sold a total of 50,746 vehicles between January and September this year, up 8.2 percent from the same period a year earlier. Mercedes-Benz also ranked third in September in sales, coming just after Hyundai Motor and Kia Motors while beating three domestic automakers - largely due to the success of its E-Class sedans and a sharp decline in Japanese vehicle sales.

But the luxury automaker is still hungry for more, and perhaps it should be, as its AMG models have not been as successful as other models it sells in Korea. From January to September this year, Mercedes-Benz Korea sold only 1,010 AMG units, around half of the sales number made during the same period last year.

To boost unit sales and even score a win in the market, Mercedes-Benz Korea launched the new Mercedes-AMG GT 4-Door Coupe series and invited reporters to drive the models on a circuit last month.

“We bring to you today our street legal racers that come with stunning design and powerful, brutal performance,” said Mark Raine, vice president of product and marketing at Mercedes-Benz Korea, during the media event. 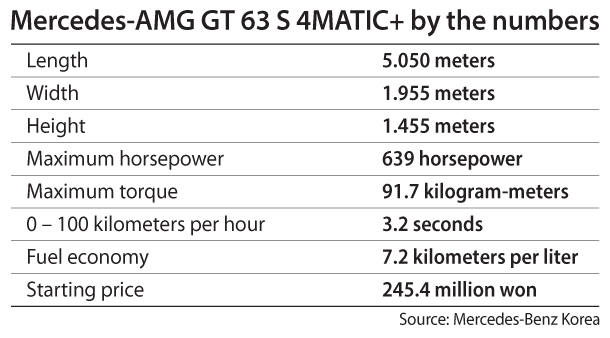 On a recent windy day, this reporter got behind the wheel of the Mercedes-AMG GT 63 S 4MATIC+, guided the beast around the circuit at the AMG Speedway in Yongin, Gyeonggi and learned through all senses that the new AMG model just might be the right competitor to the Panamera.

The muscular yet nimble design achieved superb driving dynamics despite weighing in at more than 2 tons and produces an authentic sporty voice while doing so. It’s enough to separate the rich from their money, especially for those in the market for a four-door sports sedan.

While maintaining the traditional Mercedes-Benz logo at the center of large AMG Panamericana grille, the GT S 63 is a mix of a hammerhead and a great white shark at the front - powerful but agile all at once. The classic coupe design is maintained along the lines, but an active rear wing adds a touch of sportiness.

The luxurious sportiness seamlessly continued into the AMG model’s interior design. Leather-made performance seats seemed supportive enough for a driver of any size, and their design worked harmoniously with a conventional-looking cockpit. Circular air conditioner vents and a nappa leather-covered steering wheel suggested the cockpit of a commercial airliner.

Whether the GT 63 is significantly better than the Panamera Turbo, I am not so sure. But it sure was fun trying to figure that out.

With its nine-level, dual-clutch automatic transmission coupled with a twin-turbo 4.0-liter V8 gasoline engine, the GT 63 is rated at 639 horsepower and 91.7 kilogram-meters (663 pound-feet) in torque, superb numbers for any car out on the market. The car can reach 100 kilometers (62 miles) per hour in just 3.2 seconds.

After putting the driving mode to Sport+, the GT 63 was pushed effortlessly to 200 kilometers per hour by this mild-mannered reporter. Sport driving mode was satisfactory, but Sport+ made all the difference.

Even when making sharp turns at almost 100 kilometers per hour, I felt no sense of danger.

The vehicle was responsive, and the performance seats held me tight in place; seat belts definitely had no work to do.

As the test drive event was dedicated to driving the model only on the circuit, there was not much time for me to check whether the GT 63 was digital-savvy enough to meet the expectations of Korean drivers.

But the 12.3-inch high-resolution display infotainment system seemed to be working fine with no noticeable delays. Mercedes is still outperforming other foreign automakers in terms of the gadgets, bells and whistles.

I didn’t have a chance to test the GT 63’s digital safety and convenience features, but the spec sheet says that the AMG model is equipped with all the safety alarms and mechanisms one would expect when paying almost 250 million won for a vehicle.

All said and done, the AMG GT 63 S 4MATIC+ is an extremely expensive car, but the design and performance match the price. Driving would be pleasurable every second, and comfort is also guaranteed on any course.

The new AMG model will definitely be a threat that cannot be ignored in the Korean luxury four-door sports sedan market dominated by the Panamera lineup.