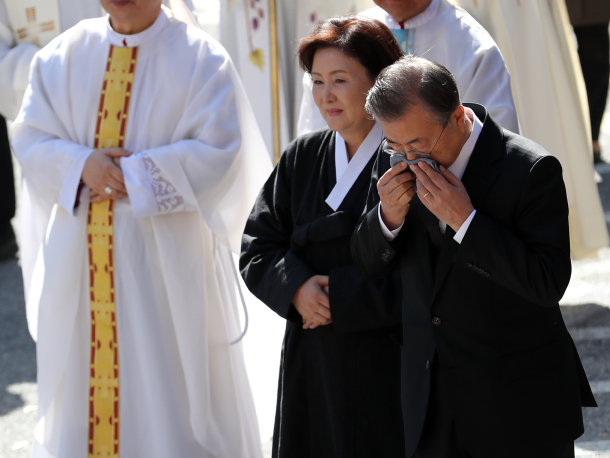 “State Affairs Commission Chairman Kim has sent a letter of condolence to President Moon on Wednesday,” presidential spokeswoman Ko Min-jung said Thursday afternoon. “In the letter, Kim expressed his deep condolences and sympathy over the passing of [the president’s mother] Kang Han-ok and offered words of consolation to President Moon.”

According to Ko, the letter was delivered in the truce village of Panmunjom Wednesday afternoon. Later that night, it was hand-delivered to the president, who was mourning his mother’s death at the Namcheon Cathedral of the Holy Cross in Busan.

Kang died Tuesday at the age of 92 in a hospital in Busan, and a mourning altar and a temporary presidential office were set up at the cathedral in the southern city. The funeral mass, cremation and burial took place on Thursday.

Youn Kun-young, director of the state affairs planning and monitoring office at the Blue House, hand-delivered it to Moon, a presidential aide said.

Asked if the condolence letter was delivered by Kim Yo-jong, younger sister of the North Korean leader, the source said, “No.”

The official also said the two Koreas did not discuss any topic other than Moon’s mother’s death when they had contact in Panmunjom. Speculation was high that Seoul and Pyongyang might use the opportunity to discuss Kim Jong-un’s order last week to remove all South Korean facilities at the Mount Kumgang resort.

The official dismissed media reports that Pyongyang intentionally waited for days to express condolences. “The condolence letter was handed over Wednesday afternoon,” the official said. “And the president’s mother passed away late Tuesday evening. Taking into account all circumstances, we don’t think the letter was delayed.”

The official also said it was a stretch to link the condolence letter to other inter-Korean issues.

Last week, the North Korean leader Kim ordered the complete removal of South Korean-built tourist facilities in the mountain resort, declaring it no longer an emblem of inter-Korean cooperation.

Pyongyang rejected Seoul’s request to hold talks on the situation.

Mount Kumgang tours, launched in 1998, were suspended in 2008 after a South Korean traveler was shot dead by a North Korean soldier. Moon and Kim agreed in September last year to resume them when relevant conditions were met, but no progress has been made.

According to the ministry, Hyundai Asan has invested $196.6 million in the tours. KTO and other companies together invested another $122.6 million.