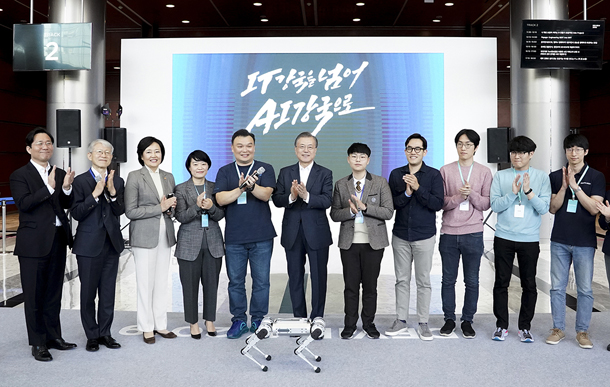 LEE DONG-HYEON
The author is a deputy industry 1 team editor of the JoongAng Ilbo.

On Oct. 26, a video titled “New Robot Makes Soldiers Obsolete” was posted on YouTube. The video showed a humanoid soldier training. The robot takes a gun from a human and aims at a target, and people kick the robot or put it in front of obstacles. Despite the disturbances, the robot manages to hit the target. At the end of the video, the robot is ordered to shoot at an animal-shaped robot, and it threatens people with warning shots, saves the robot and escapes.

As the video spread on social media, some thought it was an actual robot. The watermark on the video reads “Bosstown Dynamics,” a parody of Boston Dynamics, a maker of humanoid and four-legged robotic animals. Boston Dynamics is known for rigorous testing, close to abuse, to make robots.

The creators of the video are special effects specialists known as the Corridor Crew. Similar to how “The Lord of the Rings” film series was shot, actors wearing tight green suits had motion capture sensors on their bodies, and computer graphics were added. It is not the first time that they created a parody video of Boston Dynamics robots. On a television show, they said that they wanted to raise the ethical issue between humanoids and humans that could become a reality in the future.

Recently, President Moon Jae-in said that artificial intelligence (AI) is a partner of humanity. It will take some time until robots resembling humans can be made, but AI and robots are widely used around us. For AI to be a real partner, we need to start thinking about various regulations and ethical issues.